Ugh, that’s a tricky one. I’d say a dog in a suitcase in Dublin. Later on, it turned out that the owner of said suitcase was just really good at imitating a dog, he had a good laugh to my expense… I was very close to calling animal shelter.
My second choice would be inappropriate behavior in subways, metros, barts, darts, t-banes, Ubahnen, tubes and several other public transportation systems all over Europe and the US, e.g. changing clothes, changing contact lenses, sleeping drunk or drunk sleeping, screaming, yelling, crying, you know, that kind of thing that each one of us at one or another point in time has encountered at least once. These incidents usually are met with long stares or quick glances, glares, smiles, laughs, shaking heads and whispers like, ‘Why would they do that? That’s the weirdest thing I have ever seen on the train…’

Lately though, I – we – have been on the other side of these whispers.
It all started back in December when we decided to get Hamie, the hamster. The decision was a quick and easy one, we saw Hams, put him in a little box, bought a cage, food and shavings and what ever else you need to have a happy hamster and then we took him home, on the train. I had to keep him in my jacket, so he wouldn’t freeze to death and I kept him protected, talked to him, made sure he was alright and got used to my smell, which in return lead people to believe that I was going completely mad talking to someone or rather something inside my jacket, to the eye of the beholder nonetheless unseen.

The next crazy thing, was the folded up mattress. We definitely earned some looks, that judging by our most previous experiences, are now very hard to validate. I’d say people thought we were innovative, to say the least. But it was fairly easy to juggle the mattress, so it wasn’t a huge distraction for people passing. They would glance at it, smile and move on. But up to that point, it has been definitely the weirdest thing I ever put on a train. Somehow the rolled up mattress didn’t lead people to believe that we have gone completely crazy.

Since we just moved into our new apartment, we spent the last couple of weeks moving some of the smaller items via public transportation. It wasn’t like uber crazy stuff, meaning: wooden chairs, side tables, tall stand lamps, 2m*3m long carpets… you name it, we transported it. But even these items were actually fairly easy to move, yes, a wee bit bulky but still easy enough to take it on the public transportation, without creating a huge public distraction/gathering/irritation. People were nice enough about it, here and there we would get a smile, a small laughter, a few jokes, a nod, not your everyday items you put on your train but managable.

But this weekend we topped ourselves. There were only two items left that yet had to be transferred into our new home: a huge green sofa and a long brown, very nice coffee table. THAT was it, nothing else (or at least nothing else, that would make you turn your heads on the train).

Saturday morning, we got up super early, picked up a little metal cart from A’s work place and went to our old home. A and I both stared at the last remained items we yet had to move in disbelief. Really? I mean seriously? Are we really trying to move a sofa on the train??? WHO DOES THAT? Well, we do and we did. 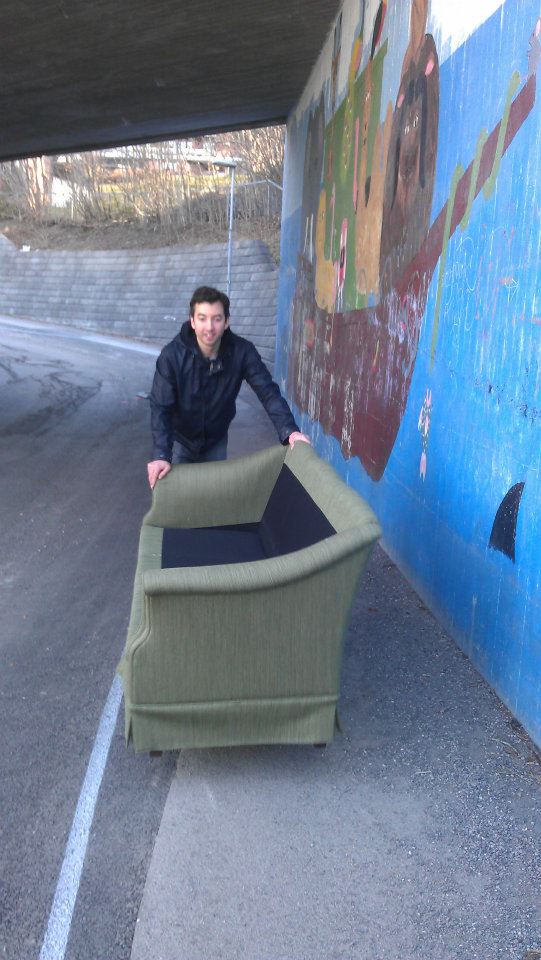 We wheeled the sofa down the hill, put it on the platform, un-wheeled it, to make the putting into the train easier, which worked out surprisingly well. A and I, both developed a sense of pride, a sense of accomplishment, that was until we  realized the stares. The looks of disbelief, the shaking heads, the trying to approach us with a witty line but not being able to. And A and I smiled back at everyone that met our eyes. We somehow put our sofa on the train, made sure it wasn’t in anyone’s way and we sat on it, while driving. People were getting on and off the train, trying to check out, what our deal was but we managed to not get into a discussion as to why we were doing this. We stopped at the closest train station to us, which is the sketchiest part of Oslo but still managed to deliver our sofa home safely.

But our adventure doesn’t stop there. As you can see, there were no pillows on our sofa, when we moved it, so here they are:

Trussed like your Sunday roast. Securely attached to our coffee table, which was protected by a carpet and a thick woolen blanket. This of course was easier to handle than the sofa, since it was smaller and lighter but was equally met with stares. Needless to say that eventually we got our table home too and now we have a nicely decorated home, which we very much love.

Now, the real question remains: Why would two somewhat sane people try to move everything on public transportation, when in fact they could as easily just rent a truck and be done with it, just like that? Well, mainly because then the story would only be half as amusing, but also because A took it upon himself to proof, that you don’t always have to be mainstream, you can do things just like you wish, no one is going to limit you, they might stare at you, question your reasoning, wonder, even approach you with questions, but in the end, they will pay you respect and admire you for what you have accomplished.

In our case though, when we told the story to co-workers, friends and families, they had a very very very good laugh out of it, so yeah, that’s a good reason too, why we did it, I suppose.