A and I just moved in the most wonderful apartment (something new) in city center in Oslo and we absolutely love it. The parks, the cafés the restaurants, the nice little houses close by, it’s almost like living in the suburbs but in the heart of the city. We discovered some nice little places (or some bigger places, for instance: the Freia chocolate factory with the most delicious smells you can only imagine), we walk around the area almost every night, not only to sniff up the chocolate factory but also because we just love it here so much. The outside is great (obviously), so this past weekend it was time to decorate the inside of the apartment. We had all the furniture we wanted and needed but our walls were incredibly empty.

When we first moved in, our landlord showed us our cellar-unit (a little 10 square meter room), he said the stuff that was in there (mostly old furniture, some boxes, some random equipment…), has been in there for years, even before he bought the apartment and no one ever cared to throw stuff out and since he figured, one day he will have a tenant who will need some of the stuff, he just left it in there, but we were more than welcome to clean out, throw out and do what ever we want with the cellar.
In our quest do decorate our apartment, we figured, why not jump in the cellar first, see what’s down there and once we cleaned everything out, maybe get lucky here and there, we will go ahead and check out antique stores to find decorative items.

A dove in (not bothering to put on fake-construction-gloves, since we didn’t have real ones) before I had my handmade zip-lock-gloves on, I did not want to touch anything that smelled like something had peed on it and the reality was, that something did get loose in the basement and peed all over the place leaving our ‘treasures’ with a disgusting strong smell. We dug out everything and anything, boxes and bags, we walked over antique furniture, climbed from here to there just to see what’s in the box across the room and what is behind the huge closet. We dug and dug and after about 3 hours, we finally managed to somewhat organized the place. At one point A poked something he couldn’t quite identify. He picked it up with the end of a stick and asked me, what it was. I started screaming of the top of my lungs and told him to drop it. It was a decayed rat (something old), which left me wondering if there were some alive rats down there as well. Needless to say I worked twice as fast, to get out there asap (also, since this weekend I haven’t been down there anymore and I believe it will be a long time before I will go again…).

We found some good items, maps of Norway from 1905, skiers from probably around the same time, some VW-hubcaps (the  American Pickers would be very proud of us…) but most of the stuff was in bad condition, it needed a lot of cleaning, a lot of repairing and tons of time, we knew that looking at our treasures, but A saw the potential and insisted on going ahead and try to make the best of it (I believe part of him was still a wee bit embarrassed from last time we went to Ikea, which is why he wanted to avoid having to go there…). So we did, we took some scrap wood upstairs, some drawers (A had some very innovative and creative ideas…), some this and some that. Our entrance hall looked like a junkyard but looking at our treasures made both, A and me very happy. We even found some glass floats from an old sailing-ship (something blue), we found a wonderful old secretary that was missing its legs but otherwise looked fine. So we took it apart and saved the parts we thought we could use. We found an old and heavy mirror and some smaller items.

Now A and I didn’t move to Oslo with a set of tools, I don’t think anyone would. In our old apartment we didn’t need anything either, but the Martinsens had a huge toolbox (although the tools themselves must have been at least 20 years old), so when we moved we – for the sake of the story – let’s call it ‘borrowed’ the toolbox (something borrowed). The next day was spend measuring and sawing wood, drilling holes in the walls and gazing at our beautifully decorated apartment, which to this day, we still do. Every time I enter the apartment I am excited and happy and just genuinely feel good about the apartment. And now, when ever we have company, they – at least I hope so – will feel it too. The something old, something new, something borrowed and something blue-feeling. 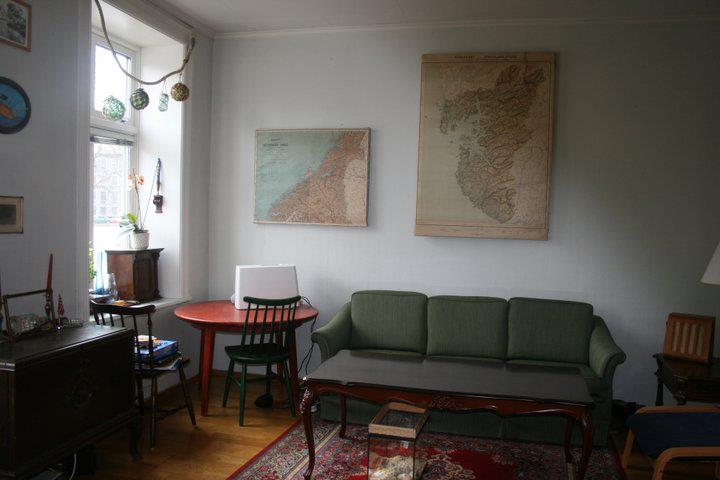 this is what you do with a bunch of drawers…

Epilogue: As we were skyping with the marsbars-superhero this past week, he complained about the titles I give my blog-posts. He said, that they were misleading and that every time he gets excited about ‘a possible proposal’ but that up to now there hasn’t been any proposing done. I just want to let you know, that when we do decide to get engaged to be married, you guys will be the first one to know (after I hysterically called my mom and cry (happy tears) for about an hour or so) and even then, I bet the title will be misleading – so stay tuned 😉