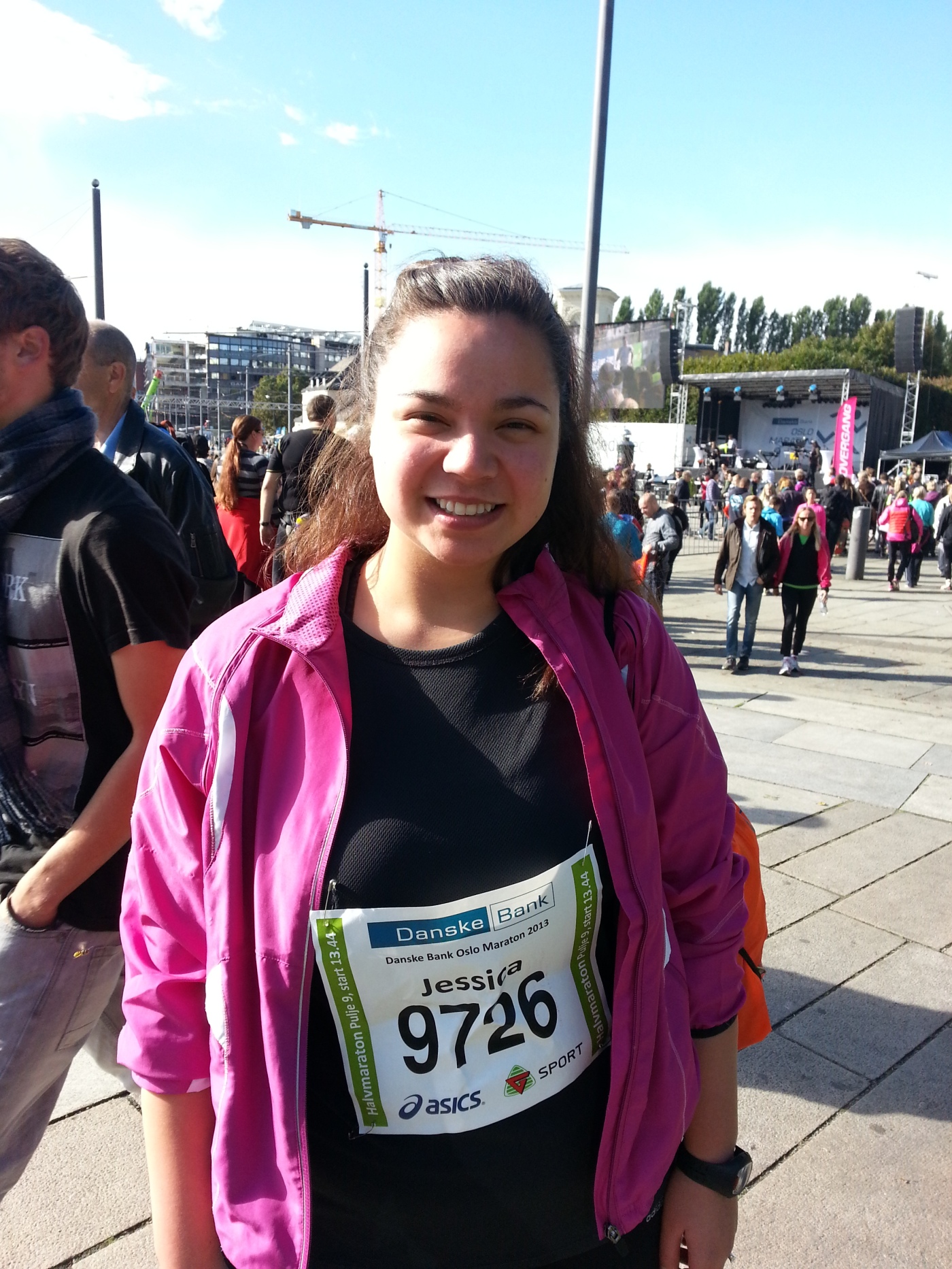 The racing day started with me waking up to a pounding headache that I figured came from all the excitement (or the extreme weather changes) but I decided to take it easy that Saturday morning and just relax. Had some tea, ate some breakfast and tried to follow all the pre-marathon rules. Like don’t eat too much, don’t eat too little, don’t drink too much, don’t drink 30 minutes before the run, don’t do this, don’t do that. What my rules didn’t anticipate was that between 8 am and 1.30 pm there is a long stretch with nothing else to do than worrying. All my worries proved to be complete bogus. See, for the last three weeks my hip was just not loving the running, every time I would finish a run, my hip would thank me with excruciating pain. I was worried that the run would put me in a lot of pain, but for some odd reason, it didn’t. Not even a pinch of pain, not even when trying to get up the steep inclines, nothing. What however gave me a great deal of pain was the bee-sting I got only minutes before the race. In retrospect, I blame that to be the cause for me not doing too well (after all it is easier to blame a bee for my not-so-well-doing than my own exhausted energies). The medics at the emergency-tents were extremely helpful and very caring, telling me to take it easy and that the small wonderful lotion would kick in in a few minutes time. And it did, either that or I blocked out all the pain I felt for the rest of the day.

I don’t know how many people ran with me, I want to say like half a billion, that’s at least what it felt like, but it was good, you know. You get filled with a rush of excitement, everyone running into the same direction, just like you. People cheering, yelling, clapping hands, laughing, singing, it’s quite entertaining. And up to kilometer 7 I did marvelous. I was on time, I was feeling well, everything seemed to go just splendidly well, that is until I hit kilometer 9. I crumpled like a stale cookie and I was about to give up. Every negative emotion that I could possibly feel and imagine decided to join forces within me. And if it weren’t for one simple thought, I probably would have given up right then and there. My thoughts revolved around A, he was there when I started the race and he was cheering for me at kilometer 7 and he would be there at kilometer 18, that’s what he said he would, and really can I let my better half down when he was the one training with me, when he was the one pushing me out the door, when I wanted to skip a training? (Also, I didn’t have any keys, or phone or anything that would help me get home or get in touch with A.) So all I had were my two legs and my two legs were in the race, and so was my entire body so I had to keep going, there was nothing else I could have done, just keep going and that I did. Don’t get me wrong, it ached really bad and my mind wanted to give up, but I just didn’t have any other choice, I needed to keep going and so I did. Eventually I made it to kilometer 13 were A stood and waved at me and cheered and I got so excited it gave me an extra boost.

I somehow managed to get to kilometer 18, I somehow crawled to kilometer 19 and eventually, very slowly I made it to kilometer 20. By kilometer 21 my body was in so much pain, I wasn’t quite sure how I would be able to keep going but I had to, because I was already able to see the finish line and my god, did I start sprinting at the finish line. All of a sudden I felt a rush of positive emotions going through me, my heart pounding even faster, my blood pumping, I saw millions and millions of people around me and finally I saw A.

I was crying my eyes out, the happiness I felt, was so strong and I would have yelled out if I would have had the energy but I didn’t so I just sat down and cried, just a little bit. See, it’s not easy to run, it’s certainly nothing you do every day and it’s nothing you want to do every weekend just because you feel like it, but what it is, is amazing, when you race to the finish.

My most favorite part of the race however was, that every time I felt like I could not go any further, somewhere there where onlookers and they would yell out my name (the marathon organizers smartly had the runners names printed onto the starting numbers) and tell me to keep going, they would tell me to go faster, that I am almost there and not to give up, they would laugh and clap their hands and congratulate me. At one point there were 10 children, between 5 and 8 and they were starring at me, as if I were crazy to even consider running (and yes, I am) but they clapped their hands and yelled out my name, they ran next to me and clapped and told me to keep going and how can you not keep going like this? I simply did not have any other options, did I?

It was an amazing race, tons of people and crowds and so much to see, so exciting and so much fun. But most of all I did it, I ran my second half marathon and I did not stop until I finally crossed the finish line. And although I am in a lot of pain now, I cannot wait for the next marathon, which will be a few months to go… For now I am taking a couple days of a break before I train for my next 10k which will take place in a month’s time! And I urge you to do the same thing, take a break and then keep going, do the one thing that seems impossible to you, do the thing that hurts the most, because the reward is simply priceless.