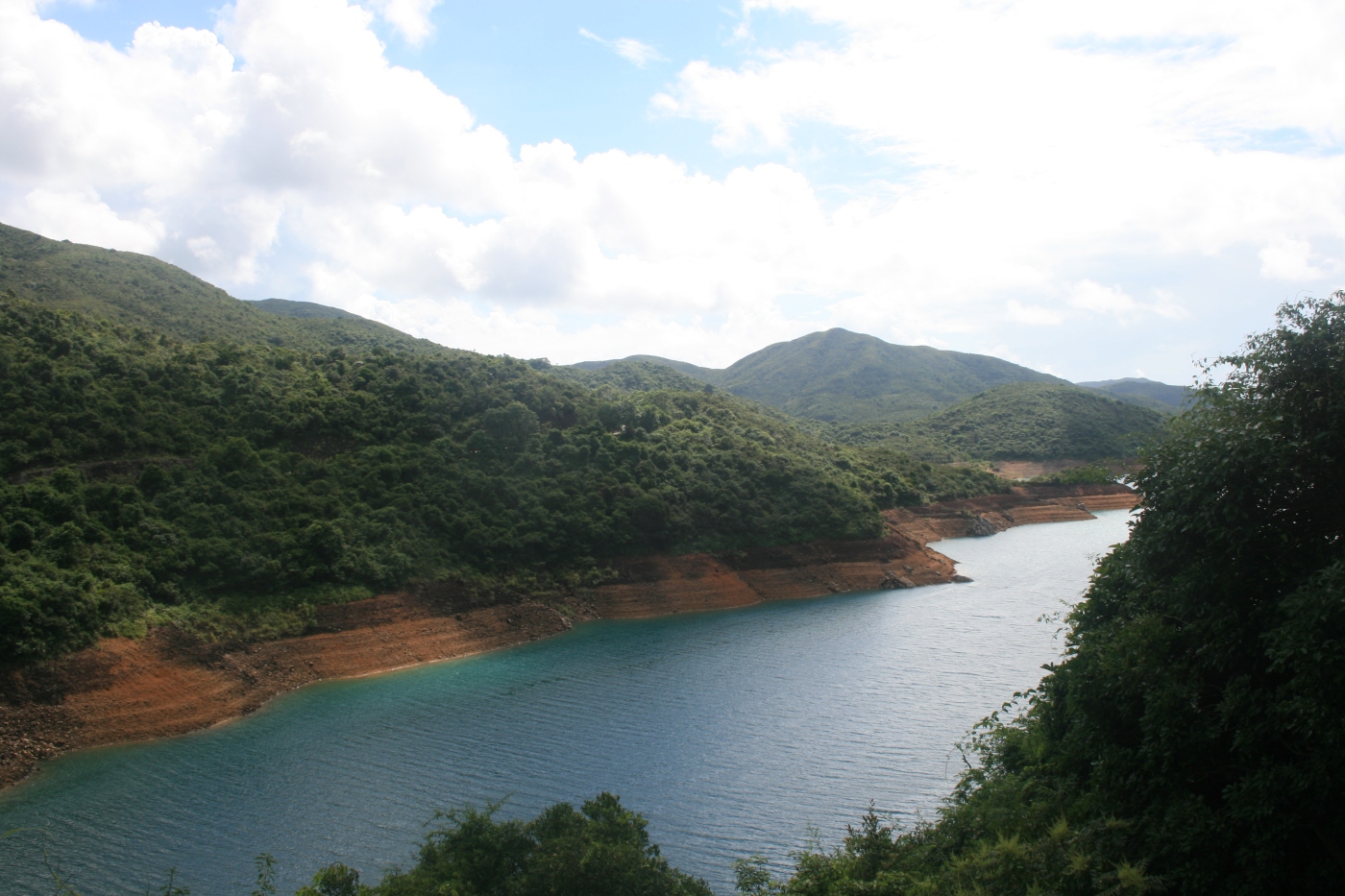 My dad always says that sometimes you will discover signs that tell you what to do. He also says, that if there are three obvious signs, that you shouldn’t do something, listen to it, more often than not, you will discover that something or someone is trying to tell you something. My dad is not a religious man, he says he noticed this throughout the years and with lots of wrong turns along the way. You can call it superstition, interpretation, belief or whatever else pops into your mind. But as I battle with the aftermath of heat exhaustion and dehydration, he might be on to something. But being determined (read: stubborn), I chose to do the exact opposite and have only myself to blame. Because in retrospect, there where at least 90 signs (or 30 if you prefer metric) that I shouldn’t have done this.

As I step out of the comfort of my one-bedroom/bathroom apartment, the hot air instantly reminds of where I am at. A film of sweat almost immediately forms on my skin and all I want to do is go back to my AC room and let the cool air blast over my body. I reach the 1950s elevator that looks like it survived 2 world wars and several revolutions but never got the upgrade it badly needed. I step in and push the button to the ground floor. 14 floors beneath me and I hope that this is not the time, that one of the chains break and I plummet into death, that would be an awful way to go. I somewhat safely make it to the ground floor and push the wooden door  with my left foot open, careful not to touch it, as I am sure that this thing has not been washed ever since it first got installed.

I leave the front door and am met by a gut wrenching smell and it stays with me for most of the subway ride and the two bus rides. Eventually, 2 hours later, I make it to the country park where I intend to climb 23 km. I knew it was a lot, especially for someone that is not properly adjusted to the weather conditions, but I carefully studied the map before I decided to do this hike and it looked doable. So I started my climb, growing more excited with every step.  After all how can you not seeing this?

At this point I practically begin charging up the hills, I kept telling myself, I am a runner, why wouldn’t I run to the first stopping point? Well, this is partly why:

And I know they look harmless, after all, they are cows, right? But quite honestly, I think they are like the elephants of the mountains. They look like they couldn’t care less but I am sure, if I would have done one wrong move, it might have been my last. I don’t know how often they startled me (or vice versa), popping out of nowhere, never making a sound. In Austria they at least wear bells so you can hear them from afar, but in Hong Kong? No, just quietly grassing in the middle of nowhere.

At this point the sun was beating down and I could feel the heat steaming off the walkway since most of the hike was not sun protected. Ever so often I could catch my breath in a shaded area but shade usually meant no airflow either, since it was protected by thick jungle-like vegetation and sides of the mountains. Halfway through my hike I popped out my umbrella and hoped for some much needed sun-relief but it was short lived. Where there was no protection from the sun there were vast areas of strong warm winds that would blow my umbrella in all kinds of directions and I felt my heart sink. This was not at all enjoyable.

I kept telling myself that this hike was all worth it, by then I already drank half of my water resources (I had about 3 liters with me, or if you will a gallon), ate half of my food and still haven’t made it to the first check point. But I couldn’t take my eyes off the beauty I was provided with and I couldn’t stop myself from hiking. 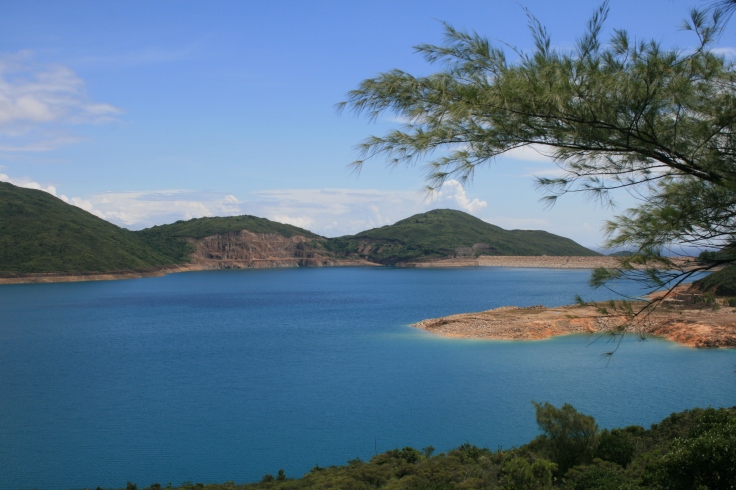 After two hours of the brutal sun I eventually made it to the first check point and that’s when it hit me. The tiredness in my bones, my heart in my head, my pulse going off the charts. But I thought to myself, it must have been just the last quarter that I charged up, I am sure it will calm down eventually and I kept telling myself, this was normal. So I went on. To discover this gem:

A sight for sore eyes (and legs). I could barely believe what I was seeing and this picture, although it captures a bit, doesn’t show you the real beauty that this beach is. The staircase down to the beach was horrific though, it was crooked and uneven and seeing how far I had to go down, to get to the beach, my heart ached. As I carried on, I realized, that this could have very well been sign one. My body was screaming with every step I took, I felt my fingers being unable to hold my umbrella, By then I only had one liter bottle with water left but I knew that the end was somewhat close, like halfway close.

I continued my walk and followed some fellow hikers to the trail that would lead me to my end point and as they moved on in a somewhat quick pace, they suddenly all disappeared and I was met with a huge cow in the middle of the pathway with no way to turn right or left. She was looking right at me, not a care in the world and I was looking at her, wondering why on earth she would be here and where she came from. Because I am pretty sure she didn’t walk down the steep steps that I just climbed down. So I stood there, trying not to meet her eyes (also, no one ever told me how to behave in a situation like that, so I have no idea how to stay safe when met by a wild cow). Eventually I got around her, climbing through thick woods, got bitten by several undefinable insects. The sweat dripping off of me as if I just took a shower and forgot to dry off. In retrospect, that probably was my second sign.

But I pushed through, slipped several times on the pathway, almost fell into a insect infested stream and now being far away from any airflow. It was hot, steamy and in the middle of nowhere in the jungle. By then I lost signal on my phone, my heart was pounding, my head hurting and my water resources slowly disappearing. I knew I still had at least another 4 km to go and I was seriously debating whether or not I could make it.

As I inched further into the thick jungle I noticed an incline and out of nowhere, flights of stairs, where you don’t want flights of stairs. And my heart sank even further. In my desperation, I decided to sit down on scourging hot steps and I instantly knew, that was a bad idea. This was my final blow. I realized, I could not move any further, not even one single step. I knew I had to get back to shade, I knew I had to get water, I knew I had to flee this amazing beach which quickly became my personal hell. I just knew, that I had to get out of there as soon as possible. But the question was, how?

I couldn’t go up the stairs to the end point, as that surely would had left me to faint and pass out somewhere along the way. And if you can’t go up, you have to go back. And the sheer thought of that made my legs ache even more, knowing I had to climb up the stairs to my extraction point. So I did the only sensible thing, crawled back to the beach (the cow disappeared by then) and sat down in a shaded area, drank a bit of water (what little I had left) and ate my lunch (or whatever was left of that) and I sat there and started to freeze. My body was shaking and I was hugging my legs, trying to stay awake and warm in 90 (30 degrees) heat and humidity far beyond the 70% mark. I did this for about an hour and a half before I convinced myself that I could climb up the stairs that hopefully would lead me to rescue.

And I did, it took me about 2 hours, sitting down every 10 steps or so. I sat down and would hug my legs, talking to myself, encouraging myself, that this was doable, that I can do this. By then my head was pounding, my mouth was dry and I was freezing beyond belief. Eventually I made it to the top, where I was rescued by a car that brought me back home.

I spent the rest of the day hydrating and laying in bed, barely being able to move. A day later I am still beat and in a lot of pain. I know it was really stupid of me trying to do this hike by myself, with that kind of heat, in an area I have never hiked before. I didn’t consider the elevation or Hong Kong’s love for staircases in the oddest places. But I know, that one day I will try this again, maybe when in the winter when it it less humid and hot and I am better prepared.

I guess, the moral of the story is that there are always signs, trying to guide you and you can either choose to ignore them or follow them, that is up to you, for me though I learned to be more careful, more prepared and mostly to listen to my own body. It is quite amazing what our bodies can do. I have grown more respectful of myself and I think that is a hard thing to do. To appreciate yourself. But take it from me, don’t wait until you are met with an impossible situation to appreciate yourself.

One thought on “Through hell and back.”