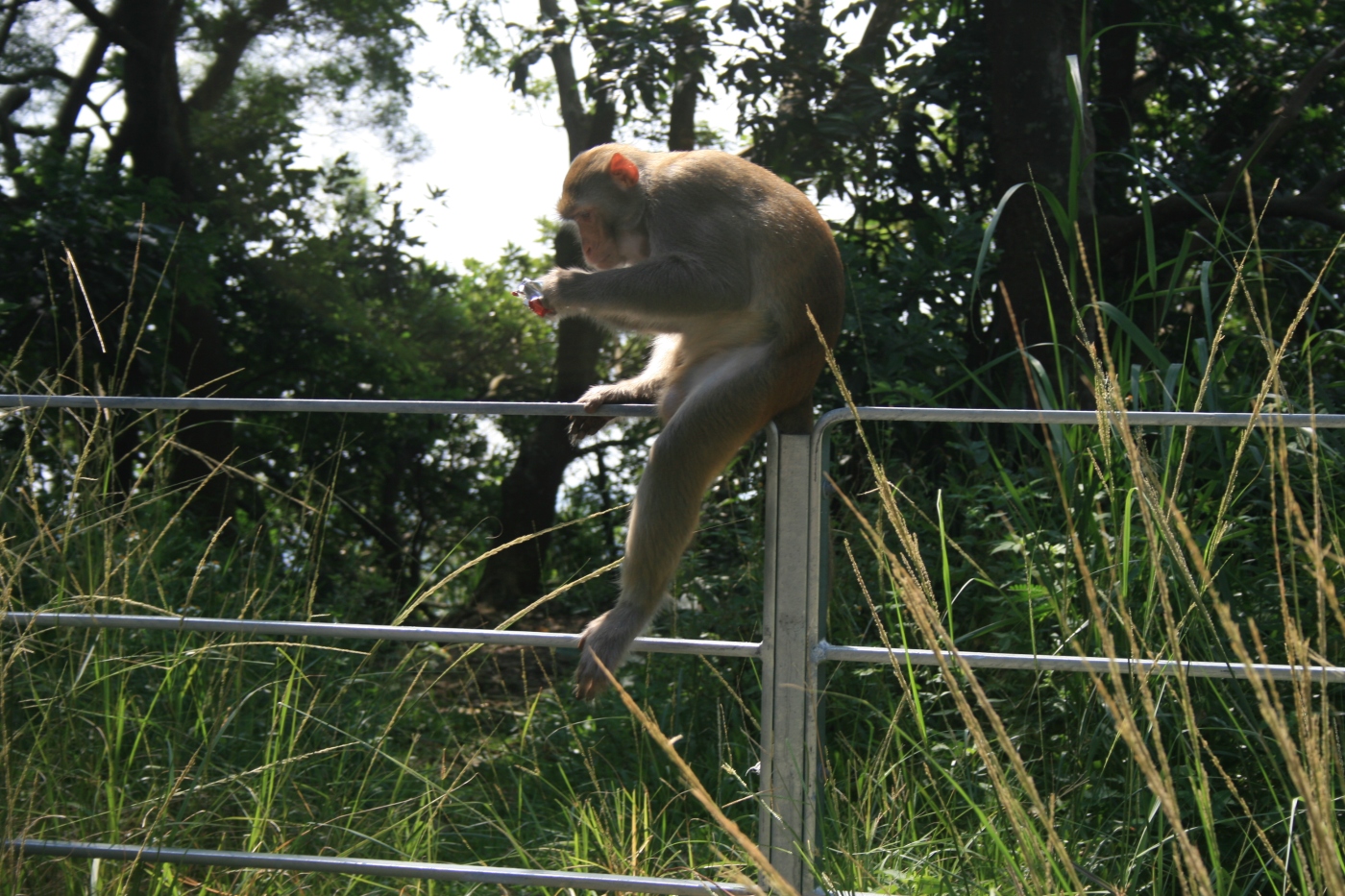 After last week’s near death experience, this week I decided to take it easy and do an easy hike.  Little did I know that easy is not always easy. So the task for that day was climbing the LION ROCK. It is a symbol of pride in Hong Kong and visible from almost anywhere in Kowloon. It is supposed to resemble a crouched down lion (if you take a picture of it from a very specific angle, I guess).

This promised to be one heck of a hike. That is until I met this guy, only a few seconds later. And I know this little creature looks harmless and tiny but he (or she) was as big as the palm of my hand. Which is why I quietly and carefully retreated, making sure it didn’t follow me.

Eventually I made it to the official start of the walking trail and was relieved, finding out that it was only about 2 km. I can do this in no time, I thought to myself. After all, a 2 km walk usually takes me about 25 minutes if I walk leisurely, so I was sure, I would be up and down the lion rock in about an hour. 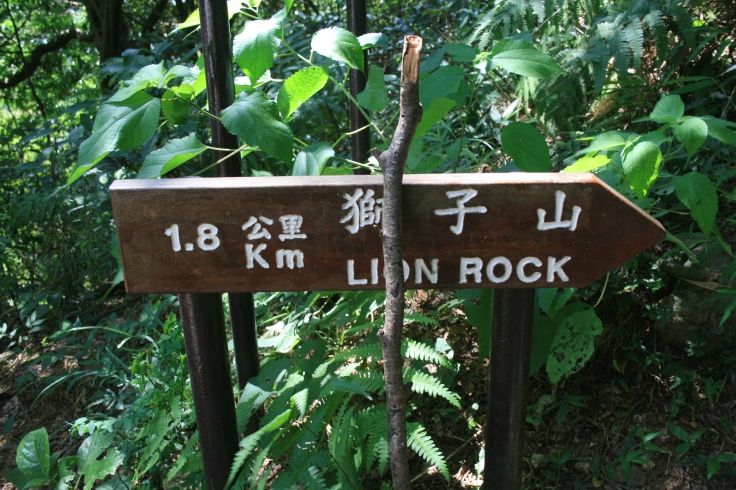 An hour later, I was still struggling with this: (and that was the easy way up)

Although thanks to my broken elevator, I have the glorious opportunity every single day to climb up 14 flights of stairs, but I realized quickly, that this exercise did not enhance my capability to do this hike in no time. I felt like I was walking up the Empire State Building rather than a mountain. And whenever I thought I made it, there was no other steps to climb, I was horribly mistaken. So more than once I would find myself pretending to enjoy the view, when in fact I was trying to catch my breath and get my heart rate under control again. Eventually though, after a grueling hour and fifteen minutes, I got to this point.

And again, I was misjudging the situation, thinking that in less than 15 minutes I should be up at the top of that rock. I didn’t anticipate that the stairs on the way up to the top would be more crooked, narrower and beyond anything horrible to climb up. But I took it easy and after 30 minutes I finally made it to the top, or so I thought.

And as I enjoyed the magnificent 360 degrees view. I noticed a small sign, that said, Lion rock 250 meters this way. And as I followed the arrow’s point, I gasped.

Was I supposed to climb down the rocks and up that rugged terrain without any safety cords, by myself, without a spotter? Well, yes and no. In my sheer disbelief that anyone would even want to climb down and up that way, I sat down and had some lunch in a place, where everyone at least once in their life should have lunch: on top of a mountain with a view that let’s you forget where you actually are.

After I regained some of my energy, I thought to myself: I can do this, I made it this far, I don’t want to turn around 250 meter short of my actual destination. After all, can you say you climbed the lion rock if you didn’t actually set foot on to the lion rock? I think not. So I carefully made my way down the boulders, jumping over several rocks, praying I wouldn’t suffer a mechanical injury (bad place to get one!). And somehow I finally was at the bottom of the lion rock. 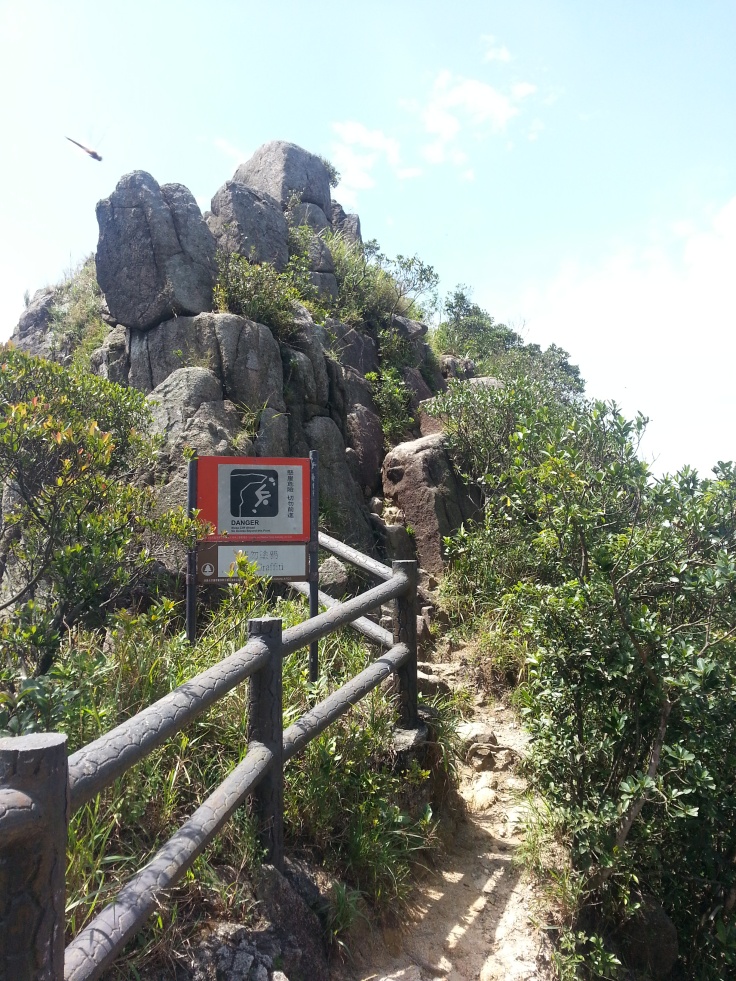 And again I thought to myself, am I supposed to climb up that rock? Is that actually safe? And if it were, why would they bother put up that sign? That couldn’t be safe. But my hunger for new experiences once more won and so I found myself rubbing noses with the rock, calculating every step I made. And my heart rate went off the charts, this time though because of anxiety rather than exhaustion. (Also, that black thing on the left upper corner is a dragonfly and how I wished I could have had wings too, so I could fly up and down, giving my sore feet much needed a break!) But I made it. Somehow. Sun lotion running down my face, my legs stung more times by tiny little creatures than I could count and my shirt drenched in sweat. But so worth it. 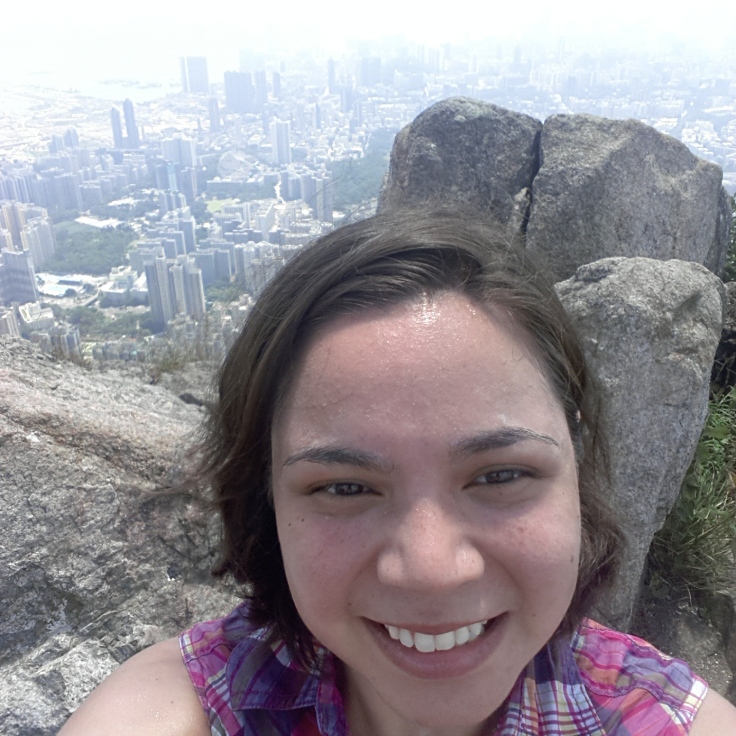 You know, how you accomplish something and you think to yourself: this is it, that was the hardest part and the second you finish that thought, you are given the sheer impossible task to accomplish something even harder? Well the hard way down was exactly that. The terrain was so rugged, I couldn’t even take pictures. I had to jump off rocks and boulders, climb down half fallen trees and making sure I wouldn’t aggravate anything that could possibly kill me (and in a situation you think anything is a potential reason to your death). But although the way down was harder, I made it in less than 45 minutes and with all my limbs still somewhat attached to my sore body.

A day later, my legs are still sore, my bug bites are itching like you wouldn’t believe and I got sunburned on my face, but the inner lioness in me is roaring with pride for having climbed the lion rock (and not plummet to death or having caused any mechanical injuries). Next weekend though, I’ll try to take it easy… Ha!