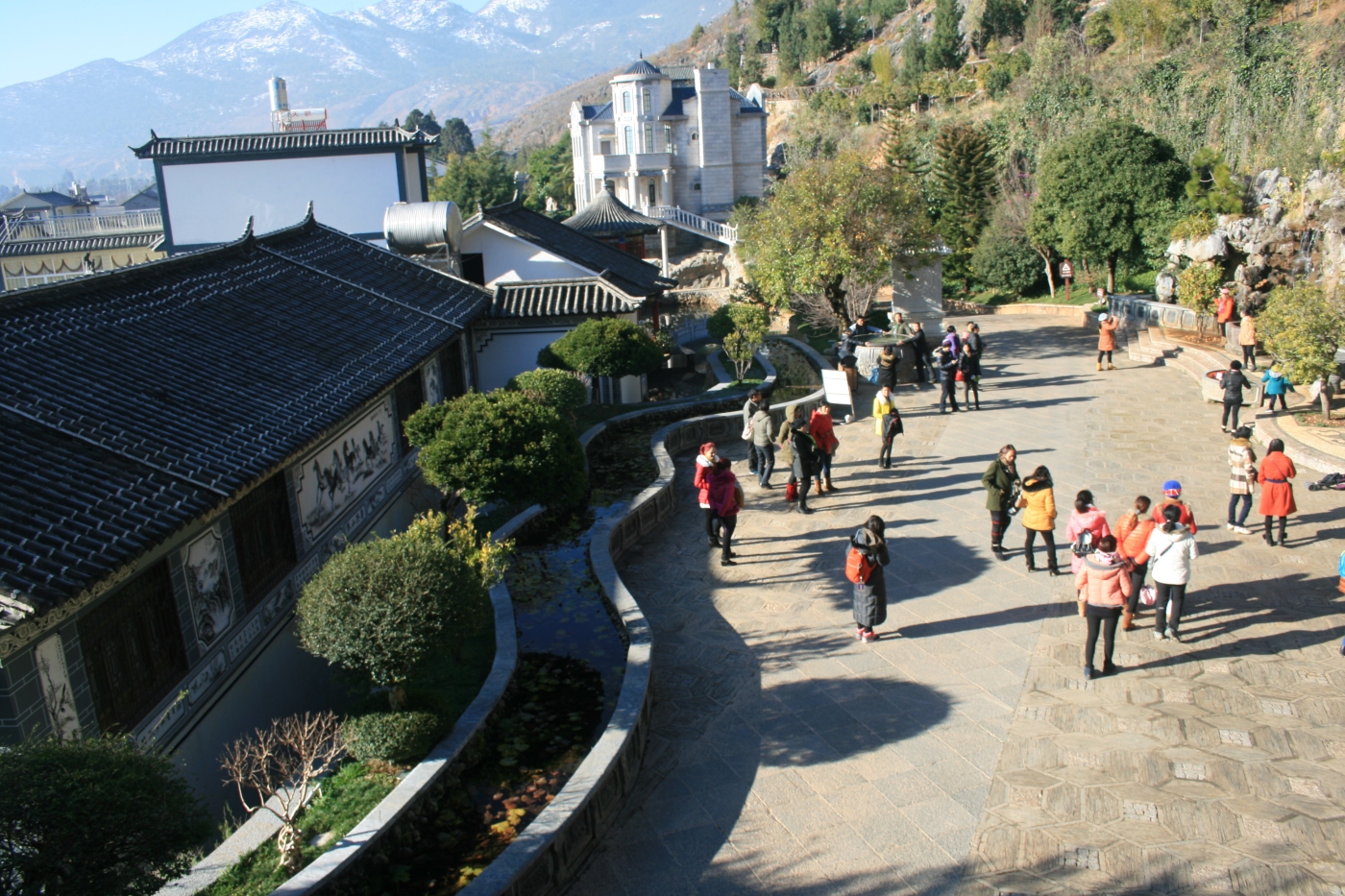 This is the third installment of our honeymoon diaries, simply because the experiences we had were far too many to pack into one single or even two blogposts. We probably should have taken the first 24 hours as a definite sign that we weren’t meant to be in Lijiang, but we decided to stay despite the power outage, almost no heat in our rooms and severe health problems. And while trying to find stuff to do in and around Lijiang, we came across a few daytrips, that we thought were interesting. Little did we know that we would ride what A described a deathtrap waiting to snap (an in 15.000 feet altitude dangling gondola lift), battling altitude sickness on a glacier and trying to avoid getting puked at on the gondola ride down. But we survived. Barely. Couldn’t get worse than this, or could it?

As we awoke the next morning (Tuesday, still counting the hours before we could leave and get back to civilization), both A and I were contempt that we have gotten through the worst and that from here on out everything would be smooth sailing. And for a while it did actually seem like that. We were picked up by a small town-car and picked up another couple along the way. Since the driver didn’t speak any English we couldn’t exactly ask him any questions about our whereabouts, we attempted to ask the couple that was in the car with us but they too only spoke little English. See, A and I, when we booked our day trips pointed at nice looking pictures that we thought looked interesting. We had no idea of how long the drive would be, what the place was called we were going to, how long we would stay at that place or anything else that seems remotely important when being on a day trip.

But, we decided to just go with it and not worry about it, chances that we would be stranded in the middle of nowhere should have seemed pretty high at this point, but we ignored every sense of danger and just learnt to accept the fact that we had no idea where we were, what we were supposed to be doing or when we would get back. Eventually, after about two hours of driving, the driver pulled up in a huge parking lot surrounded by Chinese looking buildings (as I’d imagine it coming from a western society), nothing was particularly old, everything looked fairly new and well taken care off.

Still suffering from the aftermath of the glacier, we were thankful that this trip was not physically challenging. We were brought to a little place on top of a mountain (although compared to the glacier, I’d call it a small hill) where we wondered around it someone’s home (and if I spoke Chinese fluently I could exactly tell you who that someone was, but since I don’t, I can’t). We were guided by a ‘traditional’ looking Naxi woman, who excitedly told us about anything and everything important about the place we were at, in Chinese and both A and I nodded agreeing to everything, not quite sure what else to do.

At one point she understood, that we didn’t understand a word, and she said, “You can hug the elephant”. I looked at her puzzled, because for one, I didn’t expect her to speak English to me with a perfect British accent, number two, I did not expect her to say THAT. But you don’t have to ask me twice, I will hug an elephant, if I get the chance to (although I’d never ride an elephant because of animal cruelty, but that’s a different story).

We then were ordered to lunch, which was a loud messy, not good tasting meal shared with 500 other tourist groups that all were yelling at each other while consuming massive amounts of mediocre food. After lunch we were brought to a little lake to do this:

Upon exiting the boat I almost tipped over the entire boat and made an entire boat team gasp in disbelief. What can I say, I am not equipped for boats, I am land-person. That’s all I am good for, seriously. After 12 minutes of a boat ride, we found ourselves back in the town car on the way to another city, where we again were asked to exit the vehicle and follow the cabdriver. He told us to enter an amusement park like Chinese theme park, I wouldn’t know what else to call it. It was quite interesting, realizing how hard people try to make Chinese villages seem interesting and inviting so tourists (again Chinese tourists) would come and spend their money on the entrance fee, as well as on gifts and souvenirs.

The view was nice though. Although, anything but natural, but then again, it was an easy, physically not challenging day that up to this point both A and I enjoyed very much. Even if we had no idea where we were, and how we got there.

The worst was yet to come. I wish I had picture proof of that, of what was yet to come, that is, but I don’t. Because I could barely think straight, having A holding on so tight to me, it seemed as though he was trying to choke me, for making him do this.

In the distance I spotted a little train, and loving anything that has to do with transportation e.g. gondolas, ferris wheels, airplanes, anything that A thinks possibly could kill him, I love to bits and pieces. I explained to A, that since all these things have been running for so many years, and the chances that someone could die on these things are rather slim. His argument is, that the minute something like this is build, it starts deteriorating and rusting and falling apart and ultimately turns into a death trap. As you can see, we are on two very opposing standpoints, when it comes to transportation-entertainment.

We reached the entrance of the train tracks and instantly, A’s face turned white. The train-wagons we’ve seen from the distance were in reality open car wagons with no safety belt or any other kind of protection. This is the only picture I could take of the wagons:

It’s not like the wagons were going at a manageable speed or had any protection on the side not facing the mountain we were riding along, so to me that meant pure excitement, especially because we both were almost laying horizontally in these wagons, but A saw his life end in a million ways and all the while he yelled into my ear: “If I die, I want my gravestone to say, it was because of you!” – I know, such a romantic.

We did not anticipate the next bit though, again, after riding this death machine, we figured, it couldn’t get worse than this. Up to this point I also was not aware of A’s fear of crossing sketchy bridges. As I basically sprinted across the bridge, giddy, A took it slow, real slow. Always three points of contact. And yes, the not straight railing was caused by a fallen tree that once fell onto the bridge.

All the while, he mumbled to himself, that if he would die, he would come back in my sleep and make me have nightmares of all the things I don’t like, e.g. … well, I’m not quite sure what that would be. I love almost everything that other people find particularly off putting… But since he didn’t plummet to death, he lives another day to figure out, what to hunt me down with.

Seeing A struggling to cross the bridge, makes this picture all the more fun. This little girl was a real champ, jumping up and down on the hanging bridge. A couldn’t dare to look.

And was it worth it to ride the death-train and cross the bridge? I think so. A: not so much.

After enjoying the view we slowly made our way back the mountain, this time enjoying a leisurely walk on cobbled stone. We had to cross another few bridges, but nothing too scary, as A was able to hold on to me, gripping my arm so hard, I still have some blue bruises.

We were awaited by our town car and then were taken back home. This day didn’t seem so bad after all, it had it’s ups and downs, but we were both happy. Looking forward to live another day, looking forward to our last day trip the next day. We didn’t know, that the worst was yet to come…

2 thoughts on “The Honeymoon-Diaries, Part 3: London bridge is falling down.”