When A and I first moved to Norway, some odd forever years ago (that’s at least how long it feels), we agreed that hiking to Preikestolen is on our absolute MUST to do list! Every other month or so, we would go back and look at the breathtaking pictures, telling each other, that next vacation we would do it. We would take our vacation in Stavanger and hike up Preikestolen (also called Pulpit Rock). The first six month passed. Then the first, second and third year, still haven’t been anywhere close to Preikestolen. Until this May. Finally.

Thanks Wikipedia for Preikestolen Norway

When we first arrived in Stavanger, the weather was gorgeous. The sun was shining, it wasn’t too warm or too cold or too anything, it was simply perfect. So the day before our hike, we decided to take a boattrip through Lysefjord and take a good look at Preikestolen, to see for ourselves, what we were up against.

Preikestolen from the fjord view

That didn’t look too scary. I mean yes, there is a steep fall and if you do happen to fall, you’re dead, but other than that, Preikestolen actually looked super fun. To me, anyways. A’s face was already trembling with fear (if you have forgotten, he is deadly afraid of heights). It also didn’t help that our tourguide informed us, that there was a crack between the platform and the actual rock and that eventually the platform would disintegrate. But to me, that seemed like even more fun.

The next morning came and we had a wonderful breakfast before we headed out to a ferry. The ferry would take us to a bus that would take us to the bottom of Preikestolen from where we would hike up 2 hours to get to the top. It all seemed pretty straight forward. I was so excited, I just couldn’t wait for this:

Once we disembarked the ferry it started pouring down. I checked the weather forecasts beforehand and they claimed that the rain would eventually stop, so I didn’t think too much of it. But I knew, I had to keep my positivity up for A. I tried to cheer up A, but he did not want to have any of it. He went into his dark place, where everything is simply wrong, no matter what you do or say. Every now and then I would say, halfway there, we are almost there. To which he mumbled something along the lines of us never seeing tomorrow.

But very few 50 to 100 meters we would see a little sign telling us, how much longer we would have to go and also whether or not if we were traveling the right direction. This might seem silly, it’s a hike, there should be clear markings, right? Well, you’d think that, but imagine the rain bringing in tons and tons of fog and the visibility just disappearing before your eyes. Before you know it, you could be lost in the fog and if you are not careful, it’s a long way down. Also, just so you know, due to the rain we only took a few pictures, because we were genuinely concerned with not getting injured, while being distracted taking pictures. But I just tried googling pictures of the path and it’s markings and let me tell you, there is not one single picture in google world about that. So let me describe to you, what it looked like.

Imagine the rock thingi from the Fantastic 4, but only in grey and much much much larger and less smooth. 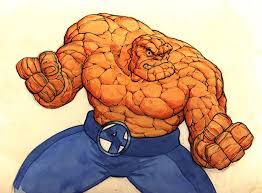 And now imagine he is the pathway and on the right hand side there is a cliff as high as Mount Everest (not literally) and every now and then you see little triangle shaped stones, marking the pathway but when you are dehydrated, hungry and exhausted and disorientated by heavy fog they look like little tiny trolls laughing at your pain. That is what the pathway feels and looks like.

Anyways, so for some odd reason (probably not so odd if you are familiar with geology) you will come across lakes, where your significant other wants to take a picture and keep that memory forever and ever. As you can see, we are drenched in rain and one of us is slightly happier than the other one.

During your hike, if you hike in mid May you will also come across snow and at least another 200 people that had the same idea as you and thought vacationing in Stavanger in May would be a good idea. Let me tell you, it might not be your best idea.

But eventually, after two long, cold and wet hours, we finally made it to the top. Not without A experiencing four heart attacks. The funny thing about fog is, that every now and then it will lift its’ heavy curtains and you can see straight down the fjord and imagine yourself die a million ways. But we made it up to Preikestolen and here is my proof:

And no, A did not want to join me to take a picture on the actual Preikestolen. We weren’t the only ones up there though. Some thought the hike was so great, they wanted to spend a night or two at the top of Preikestolen, don’t believe me, here is the proof:

By then, the rain had subdued and A enjoyed in rain drenched sandwiches and ice cold water. Within less than 15 minutes of our arrival at the top of Preikestolen it started raining again and this time harder than on the way up. So we decided to head down and beat the crowds down the slippery crawl.

It was painful, let me tell you. Three days later and I am still in agony. I fell once and busted my ankle and knee as well as ripped my pants. This is a definitely don’t do, if you ask me. Falling on sharp rocks is not recommendable, but I guess you knew that form before anyways… I am still frozen to the bone and A still has nightmares about the cliff.

Would I do it again? I’d like to say yes. Will that be in near future? No way. But either way, the point of us going to Preikestolen was to hike it and see it for ourselves and be done with the one must we were trying to accomplish for the past four years. Now, finally, we did it, now we can look forward to less scary things, for instance taking a lot of ibuprofen to get over the pain quickly.