As you might know by now, I just spend a few magical weeks in the Azores to volunteer at the Great Whale Project. My short time in the Azores was filled with so many ocean-related activities, it’s impossible to count them all, but here is a brief overview: drink saltwater, get saltwater in your eyes, wash out all your gear so it doesn’t start rusting, don’t get motion sick on the zodiac (the trick is to always focus on something that is stable and not moving), don’t get sunburned, don’t fall into the water while trying to film cetaceans under water… You see, the list is endless.

But I think, the number 1 hardest job I had to do, was putting on a wetsuit! Up to this point I thought putting on a drysuit was difficult. As you can see by the vacant expression in my face in Iceland last year I was not fully aware that this could be the second most uncomfortable I could ever feel in someone else’s swimming gear.

J in a drysuit in Iceland

But putting on a wetsuit is just a tad more difficult. It’s like putting a square block into a round whole. And the result it this: (the facial expressions come with the suits, also the GoPro takes interesting pictures…)

J in a wetsuit

It took me roughly 15 minutes to get the suit on and another 45 to take it off. This was also the first time ever I put on a wetsuit and it was a short one, not thinking through all the jellyfish and Portuguese Man o’ War that could possibly cross my way. And don’t be fooled, Portuguese Man o’ War are hauntingly beautiful and yet can be deadly (or in this case washed ashore and filmed by me, who had no idea how painful a sting from them could be).

But you don’t just put on a wetsuit, just because. Of course you put it on to get into the water! I’m no diver (yet) and so all I do is basically float atop, clumsily trying to film everything from afar and snorkel like no one ever snorkeled. Also included a lot of almost-drowning and a lot of wondering why there was water in my mask…. I don’t think I am a particularly good snorkeler, or swimmer for that matter, I can stay on top of the water if necessary. Honestly, I prefer being able to step onto hard ground in the water if necessary. That’s why the snorkel of my lifetime happened in 3 feet deep water and not in 1000 meter deep water (to be fair though, I never snorkeled anywhere close to 1000 meter depth, at most it was maybe 25 meters other than when snorkeling with the dolphins).

Usually you don’t let someone into the water by themselves, out of various safety reasons, but that particular day, about 6 days into my trip, I was the only snorkeler and so I was forced to snorkel by myself. Snorkelers would always go out on the boat with the divers and they would only stay in the water for as long as the divers would. So I knew the dives wouldn’t be longer than roughly 45 minutes. But somehow, that day, 45 minutes turned into an eternity.

The skippers told me to stay close to the boat and I thought to myself, I always do, so no worries there. After the divers dived into the depths of the deep blue, I slowly entered the water, making sure there were no potential threats (jellyfish or Portuguese Man o’ War) close to me. Little did I know, that they were the least of my concern that day.

Just as so many times before I put my snorkel in and started slowly paddling a bit away from the boat. Within minutes of looking and trying to see what there usually is to see,  I realized that there were no fish to be seen. This can mean one of two things. Either they are particularly shy that day (rather unusual behavior) or the currents were so strong that the fish couldn’t stay in one place.

For what ever reason, I then raised my head out of the water, trying to see how close the boat was and suddenly panic set in. The boat was nowhere to be seen. I turned around four or five times and then finally caught a glimpse of the boat in the far distance. This was also when I first realized how rough the sea was that day. When you are in the water, disorientation is a real problem, especially when you have no reference point. I did have the shore as my reference point, but because of the rough sea that’s where the jelly fish and Man o’ War hovered and so I did good not trying to get anywhere close to the shore. Also, if I would have tried to get to shore, there was no way that the boat would have been able to get me, because they might have gotten stranded.

I tried to remain as calm as possible and started paddling. For what seemed an eternity I paddled tirelessly trying to reach the boat, but not matter how much I paddled it seemed as if I could never reach the boat again. I knew that what ever sound I tried to make would go unnoticed. It’s not like the skippers weren’t aware of my presence but from their perspective it looked as if I was having the time of my life.

And yes, it could have been the last time of my life, at least that’s what it felt like anyways. I felt the heat rise in my body (because wetsuits trap the heat inside them and try to leave everything else on the outside) and I felt my heart pounding out of my chest. Thankfully I had the snorkel because if I would have had to swim without snorkel, chances of me ever getting close to the boat would have been slim to none (also because of the current and the rough sea). Every time I stopped for a brief moment, to see if I was getting any closer to the boat (visibility was so bad under water, that I couldn’t pinpoint the boat), I felt I was being pushed back meter for meter by the sea. So I knew, stopping was not an option. At this point, I was in full on panic mode but I couldn’t let it take over. I had to keep going, I just had to.

Eventually I came within meters of the zodiac and I was able to yell out to the skippers. I yelled almost out of breath that I couldn’t get closer to the boat and I needed help, badly. Both of the skippers, the sweetest people I’ve meet, moved in the slowest manner I have ever seen. But then again, at this point I was already close to loosing my mind and I felt the panic somewhat rising. They threw me a life line and I pulled on the line so hard that I almost yanked it out of their hands. Thankfully I had enough sense to just relax for a minute until they secured the line safely and I could pull myself close to the boat.

As I reached the latter and felt the cool plastic of the boat on my with exhaustion marked face, I felt a sense of relief. I made it. I was on the boat, almost back on land, and I did not die. I climbed on the boat and laid down on the floor bottom, trying to regain strength. The skippers smiled at me and asked if all was good. They suggested I could enter the water again, while holding on to the lifeline. I declined. There was no way, I was going to enter the water again right now.

After I had some strength in me again, I sat up and looked at the clock and realized that since I entered the water only 15 minutes had passed. 15 crucially painful long minutes. What seemed like an eternity was a less than 15 minutes rescue mission.

You never know, where a current might get you. You can’t fight it and sometimes it just swoops you away. But I didn’t let that get me down. I still went snorkeling almost every day, although with either other snorkelers and always making sure that I could safe myself if necessary. And on days when I couldn’t snorkel? Well, I would still sit on the boat and would have a good time. 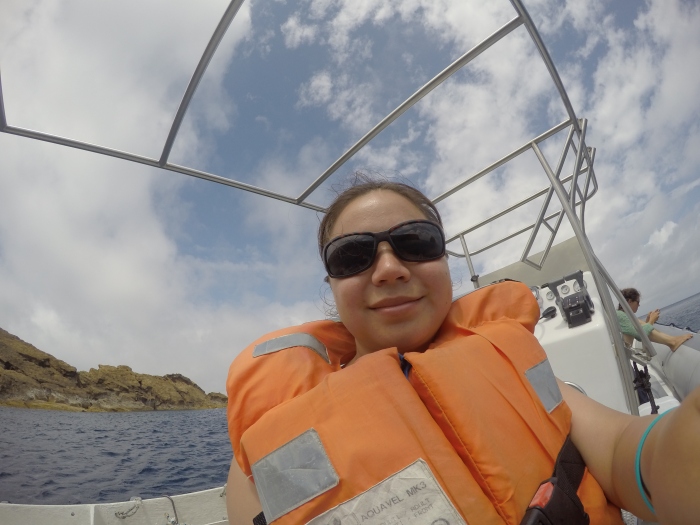 J and the swimming vest

There is a lot of footage from the day I had to be rescued (mainly shot by myself) but every shot suggested a lot of movement and a lot of panicking, rendering the footage unusable unless you enjoy the sort of dizzy, motion-sickness filming. I, for one don’t.

But I won’t leave you hanging! Instead of me almost drowning (seems to be a common theme…) I’ll give you this picture of a common dolphin leaping out of the water. After all this is way more enjoyable than my panicked face on camera!