The last half year has been incredibly stressful for A and me. We desperately needed a few days to ourselves, away from home, away from responsibilities, away from everything that we love (except for each other). So we did the only sensible thing: going on an eat-cation.

Remember Vilnius earlier this year? That’s when I introduced to you A’s vacation concept where all you do is eat. You walk from one restaurant to the next and by the end of the vacation you basically roll around. I, on the other hand, if you don’t know this, prefer active vacations, where, in A’s words, you’re walking a thin line between life and death. Like in Stavanger.

But this trip, A won the ‘argument’ so we agreed on a second attempt of  an eat-cation, since the first time I managed to get sick and basically only ate twice in the course of 4 days, not much of an eat-cation. So yes, both A and I were super looking forward to doing nothing but eat. The idea was to be super bored, so bored that we would look forward to coming back to Oslo and tackle the last few weeks before we go on Christmas vacay.

We landed about 9 pm on Friday night in Stansted, UK and were ready to get our vacation faces on (read: round and jolly). And within less than 10 minutes of us arriving at the hotel in Cambridge, we went out for our first meal at the snug. Burgers and fries and a fish-pie. Not sure why anyone would ever want to eat something called a fish-pie?!

First stop at the Snug.

After a late dinner we crashed and were awaken to a wonderfully beautiful blue sky. Being in the UK, however, we knew that this wouldn’t last so we made good use of the weather and went for a long walk through this marvelous college-town. And honestly, seeing all these great colleges, I am seriously debating to applying to one of Cambridge’s many colleges at one point or another…

A in front of King’s college.

We walked around for about 2 hours realizing that every corner we turned there was a big (fancy) gate that we couldn’t get through, because it was the weekend and because we weren’t students and because there are a million tourists at any given point in Cambridge, so it all made sense. But that didn’t prevent us from having a good time.

Eventually we found the one thing, that wasn’t gated or fenced: Newton’s apple tree. Although, not really, since that tree would be almost 300 years old by now and way bigger than this, but in the spirit of “authenticity” it’s apparently the same type of tree, just a lot younger… just like in real life. Now make a theory about that, Newton! 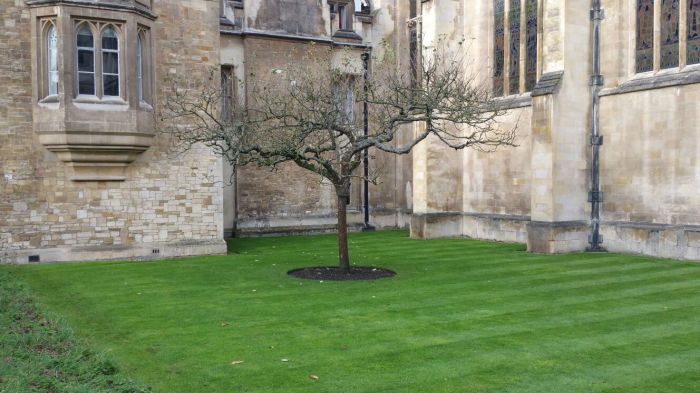 I probably shouldn’t be mocking an apple tree… So we did the other thing, one does in the UK: find a phone booth and take a picture in the phone booth. Although, to be honest, I could have done without the stench inside the booth, also otherwise known as public toilet, apparently…

In the phone booth

After that we ate at the Eagle, where DNA was discovered (long story) and WW2 soldiers would put their names on the ceiling… If you want to read more about that, google it…

After some fish and chips we waddled around for quite some time before we stopped at the candy store and bought every type of candy we weren’t able to get in Norway. And I mean EVERY SINGLE TYPE OF CANDY THERE IS. And where do you go with that much candy? Yes, of course, to the movies!

A and J at the movies

We actually went to see one movie on Saturday night and one on Sunday night because we could. And because we had that much candy and because in the second movie we were at they had reclining chairs and they were awesome and we that’s how you vacation, just going with the flow…

And speaking of flow, you can’t go to Cambridge and not go on a small tour on the river! It looked so innocent when you stroll around and watch the little boats from the countless bridges…

As I mentioned earlier,  vacation for me needs to have a certain type of thrill. And it can be anything really, I am not picky. I usually like doing things close to water or high in the air. Both of which A is not particularly fond of. But he did agree on going on a river ride… As you can see, he was not happy! 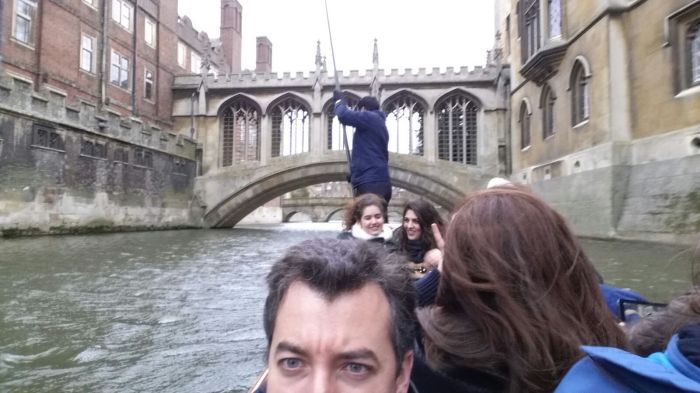 Not his idea of vacation…

To be fair though, the currents were rather strong and our boat did at times, just float uncontrollably, but then again, this is not Venice. At any given point in time we could have basically just walked from one side of the river to the other… No death treat.

I finally figured out though, how to keep A busy without him freaking out while being on a boat: let him take pictures. And that’s what he did, throughout the “longest 45 minutes of his life”.

The “bridge of sighs”

And yes, the bridge is called bridge of sighs because someone thought it looked exactly like the original bridge of sighs, which it does not… at all.

So all in all we had a great enjoyable time in Cambridge. Some experiences more fun than others, but overall both A and I did exactly what we set out to do: nothing but eat and enjoy ourselves. We barely checked emails, barely responded to anything, didn’t do any schoolwork or actual work or anything else, really. And every now and then, that’s exactly what you need to do…