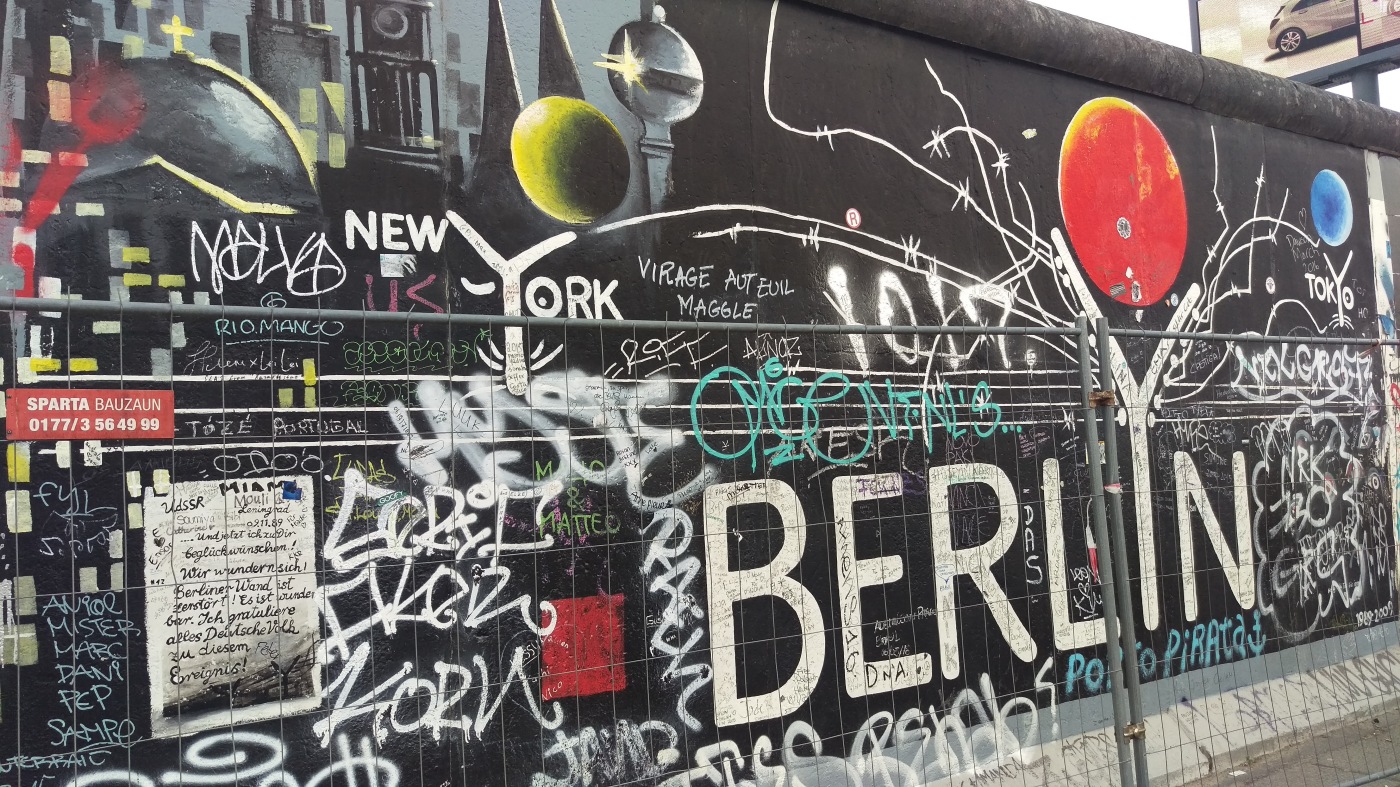 I don’t think romance always has to happen between a person and their partner. It can happen between two strangers somewhere in the middle of nowhere or between lifelong friends. It’s just a moment, the moment doesn’t mean anything other than what you make it to be. Before I go any further, just so there is no confusion: There is absolutely nothing romantic about touring the grounds of WW2, the Berlin Wall and Check-point Charlie. All of which are mind boggling in itself. If anything, it’s the opposite of romantic, it’s quite sobering to see the remains of history. Walking among constant reminders of what we have done to ourselves in only the last century, it’s simply heartbreaking.

Despite the heavy heartache, my best friend C and I tried to make the most of our 4-day-city-sight-seeing-trip. We knew we had little time to see it all, and thankfully we were somewhat caught up on each others’ lives (thank you emails and the possibility of minute-to-minute-updates!) so we could make the most of our four days. Within less than 24 hours we have seen all the major visiting points: Brandenburg gate, Olympiastadion, Victory Column and anything else that comes to your mind. By day three we were so exhausted from the heat, the tour buses and all the walking, that we decided to take it easy. Well, “easy” by our standards. We took a boat-trip on the Spree and enjoyed ice coffee (as in ice cream in your coffee) while the sun was beating down on us relentlessly.

As we enjoyed the gentle rocking, almost fell asleep four times even after the sugar rush, the three hour boat trip (highly recommended) came to an end. We were somewhat relaxed and ever so slowly we strolled into the city, determined to firstly walk as little as possible (we walked on an average 12 km per day) and secondly tour the Berlin Reichstag (official edifice in Berlin). Here is where they make all the important (political) decisions and it is definitely worth a visit. That is, if you get in.

You can visit this magnificent building anytime, but it’s like being invited to a Gala: you have to be on the guest list to even be allowed in close proximity to the building. There is an online screening process where you have to submit your personal information in order to be considered as a visitor. After some consideration they will send you an email and tell you when you may visit the inside. It’s all a precautionary measurement and although annoying, well worth the hassle.

At around 3 pm, C and I were across the city when we finally got the confirmation of the Reichstag office: 20.45 Monday evening, 2 people, be there or be square. Of course we weren’t going to let this opportunity pass, after all, how often do you get to see sunset in a glass-dome?! But this also meant that we had about 6 hours to kill before we were allowed anywhere near that building. Given that we have seen almost everything, that we thought we could possibly see, we went up and down the TV-tower as well as the Aqua Dom at the Radisson Blu. That only killed about 2 hours of our wait, so we had a snack, another 45 minutes gone.

See, the problem with being from the city is that we live fast-paced. We do everything in tremendous speed and that, sadly comes at the price of sometimes running out of options. So we did the only sensible thing at that time: We walked about 6 km to the Brandenburg gate (the Reichstag was only about 10 minutes from the gate). We figured it would maybe take us 90 minutes tops to get there. We didn’t calculate the weather however. As we were about a kilometer away from the gate (we could see it in the distance) the sky started turning a dark grey shade. We could hear the thundering from far away, but being city kids, we knew that we had some time still before the rain would fall. It’s funny, actually, we wouldn’t survive a day in the woods, but the sounds, smells and feels of the concrete jungle were always our territory. But then there was the first drop, then a second and before we knew it, we were running for cover.

Just before we reached the Brandenburg gate thundering was right above us, the only logical thing we could think of was to hide underneath the gate (we were aiming for a cafe, but you try to get a space in a cafe close to the Brandenburg gate when seemingly all tourists have the same idea and we just couldn’t bear the thought of spending a single second at Dunkin Donuts). So we aimed for the next best thing and ran for cover underneath the gate, while rain was pouring down like there was no tomorrow.

Having experienced one or two (or many more) summer city storms before, we knew that it would light up eventually, we knew that in a matter of a few minutes (max. half an hour) the sun would come out again and present herself in all her glory. In the meantime, however, we stood underneath the gate, huddled together with about 75 strangers and we all watched the rain and the lightening and listened to the thunder.  It was quite romantic, actually, I mean in a Hollywood-movie kind of way.

As we patiently awaited the passing of the rain, I noticed a young couple next to us, and I tell you, if I ever have seen love in the eyes of strangers, that was the moment. Not just the way that they protected each other from the drops of rain, the way they gave each other secretive smiles, but as if the world around them didn’t exist. The two of them existed in their own world, a world where 30 Swedish school kids screaming at every thunder went unnoticed. The older Asian woman drenched in rain didn’t register on their radar, neither did the Italian guy with his wavy long hair. Nothing seemed to face them, they just stood there, watching the rain, watching the lightening and smiling at each other, as if they knew something we didn’t know.

C and I watched the couple for quite some time, their love didn’t go unnoticed for us, their love instantly registered on our radar and all we saw was happiness between them. Love stories don’t always require the grand gesture that we all yearn for, love stories don’t need a script or a recipe, all love needs are these small moments, when people for just a second forget everything around them. There was no one playing a violin, no one singing a love song, no one even considering snapping a photo of the two, but yet their love spilled over into me and I felt their romance, just for an instance and I felt happiness.

I don’t remember much after the thunderstorm moved on. Well, that’s actually not true, I’d rather say I tried to forget everything after the thunderstorm, also due to me guiding C and myself the completely wrong way back to our hotel. What was supposed to be a 45 minute walk turned into a 2 hour hike through the city, at night, in the dark, almost no street lights. What was meant to be a “slow” day turned into a 18 km hike (you can see why C didn’t talk to me much that night anymore). But I just couldn’t shake the feeling. Their love.

Berlin is a great city, filled with much history, many things to see and experience and definitely a must for everyone. But for me, Berlin was much more than just sight-seeing. That moment, between this couple, that’s what I will remember when I think of Berlin. I just don’t think I have ever felt so emotionally connected to some strangers as right in that moment, although they clearly had no idea that I existed, right next to them. That feeling of utter deep love for each other, that’s what Berlin is all about. That and ice coffee (I mean seriously, ice cream in coffee, get out of here!).

2 thoughts on “My love letter to Berlin”