The last few weeks flew by like nothing. I can’t believe that I am halfway through my India experience already and the worst I had to live through so far was general discomfort (you learn to love it, believe me!) and a severe cold with intense fever sweats last week. This, by the way, is my backwards way of telling you that I was basically knocked out for the last entire week and therefore my experiences were confined to the four walls of my temporary home. Nonetheless, I went out, when I was strong enough, ate when I felt I could physically manage to sit longer than 30 minutes and really tried to enjoy myself, whenever possible. Which meant I read three books in less than 72 hours and did absolutely nothing else.

Thankfully I recovered just in time for our field trip to the desert. I knew I wouldn’t want to miss fun in the Thar desert. We drove for what seemed an eternity from Jaipur to Jodhpur, on bumpy roads with lots of potholes and slalomed between cows, dogs, people and motorized vehicles. A 5 hour trip quickly turned into an 8+ hour trip during which I hit my head about 17 times on the roof of our vehicle because of really really really bad driving practices. Mind you, seat belts are non existent, after all, it wouldn’t be fun any other way, would it?

We spend the first day just getting acquainted with the blue city, doing all the touristy things such as shopping, eating local specialties and of course: sight seeing. 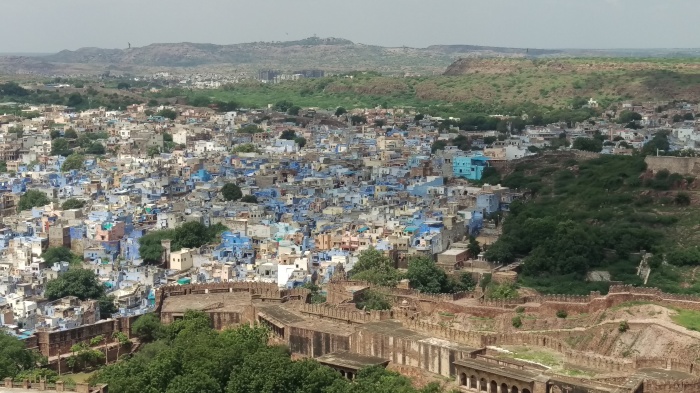 Jodhpur is quite different from Jaipur. It seems to be a bit cleaner, less frantic and even more colorful. Not just people’s clothes, but anything and everything presents itself in the most wonderful colors. I am not going to lie, it makes you feel very happy inside and we all could benefit from a bit more color in our lives. Like for instance my little green friend, he wore his best clothes just for our little photo shoot:

But being on a field course, we are not only there for the fun stuff. We are also there for learning and experiencing things we wouldn’t otherwise get to do and where better to do that than in a primary school? 50 children between the ages 4 and 9 greeted us shyly on Monday morning in the middle of nowhere. Within less than 10 minutes we were playing games, singing songs and were genuinely having a mutual fun experience even if we didn’t speak the same language. If I learnt one thing from spending much time with children, it is that fun is universal! I would have taken some pictures but being surrounded with a bunch of children, I was playing in the dirt before I knew it and never got to take a single photo. But that’s okay, after all it’s the memory that counts, right? After a wonderful morning we were shown around in several villages and got to talk to many different people about their livelihoods and they proudly showed us their houses and their agricultural land.

Our field trip so far has consisted of many explanations about what we do (Yes, we are environmentalists. Yes, we work with development. Yes, we live in Norway. Yes, this is the first time in India for most of us…) and a lot of attending lectures in rooms with bad acoustics as well as driving endlessly through badly maintained roads. So being a bunch of students from any and everywhere halfway across the world, you couldn’t drive us through the Thar desert and expect us not wanting to play and jump in sand dunes!

The sand dunes of the Thar desert

Much to the children’s delight we all climbed up the dune, some of us more elegantly than others. I, for one, almost drowned in sand three times much to the joy of the villagers but eventually I made it to the top. And even more to the enjoyment to all the people that surrounded us, I then proceeded into jumping halfway into a sand dune, where I ended up eating most of the sand. In hindsight being covered in sand was not the best idea, given that we had a long bumpy car ride back to our home, but then again, you only live once. Why not jump into every sand dune along the way, while you’re at it?

Me in the Thar desert.