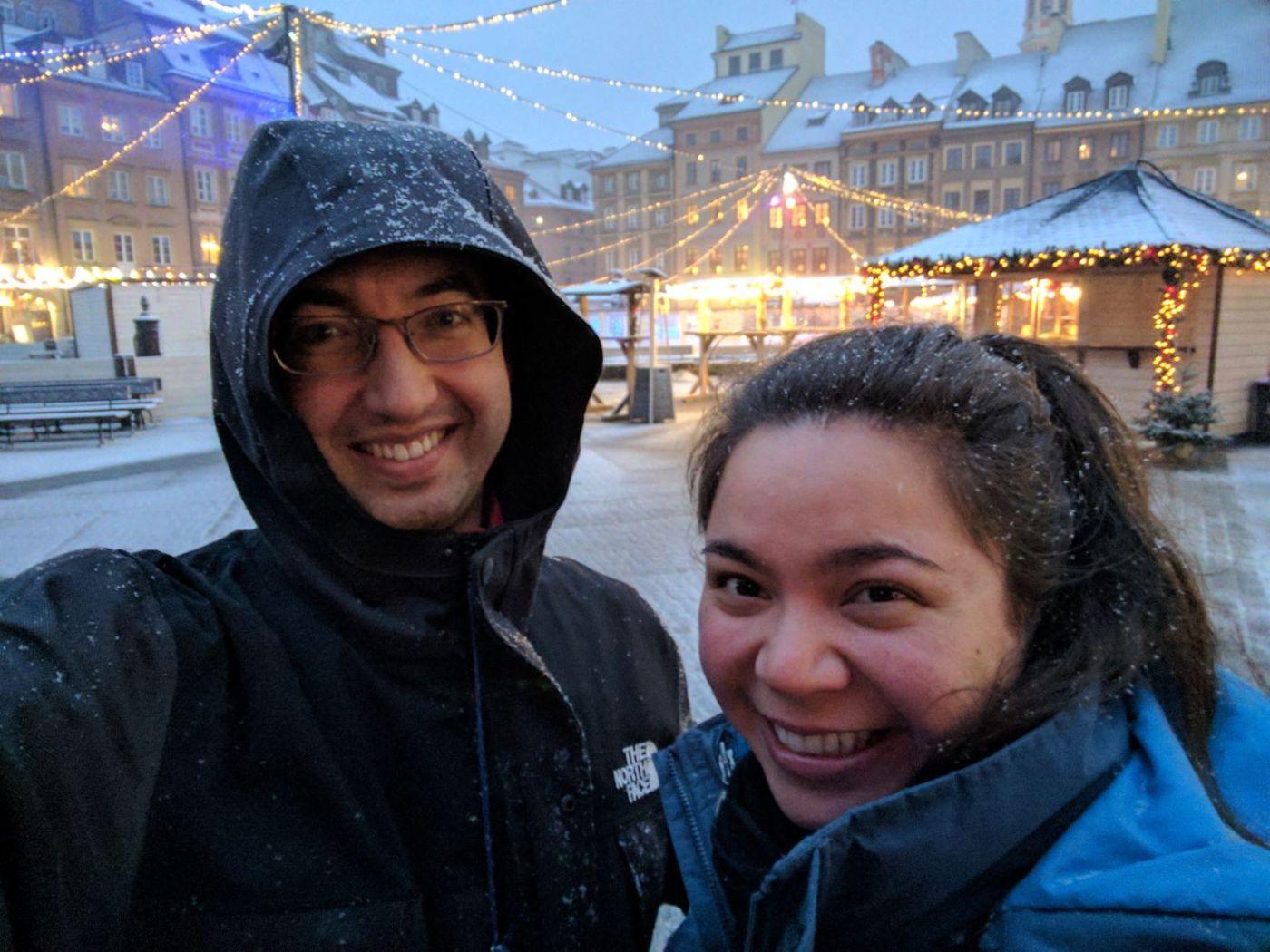 A couple years ago, on first wedding anniversary, A and I went out for pizza and drinks at a some-what nice restaurant in Oslo. Given that we celebrated our wedding in Italy, celebrating our first year at the pizza place around the corner seemed like a good idea. The pizzas were mediocre (if you had the real deal, does average pizza ever live up to it?) and the bill horrendous. That day we decided, that every year from now on we would travel for our anniversary, mainly because flights and a hotel would be as expensive as two mediocre pizzas and couple of drinks at the pizza place.

So last year, we went to Tallinn in Estonia and this year, to continue the theme of being cold and miserable on our anniversary, we went to Warsaw, Poland. Neither A nor I have ever been to Poland before, but we knew two things: 1. we wouldn’t starve and 2. we wouldn’t be bored.

The decision, where to stay, was an easy one: we chose the nicest-looking one with the best reviews, simple as that, and since our anniversary luckily falls into off-season, the prices for the nicest hotels are affordable. Everything else was pretty much determined by Rick Steve’s, yelp and tripadvisor, because, to be honest, those are the greatest resources one can use when traveling in Europe. The flight from Oslo was a mere 2 hours, which we spent working on unfinished business. Being responsible human beings in a committed relationship, we agreed that this 4 day vacation was going to be about us. Vacation us eats and drinks as they see fit, they enjoy the day, go for long walks, talk about anything and everything and that us knows how to have fun and make spontaneous decisions.

So we spent the first couple days going to some museums, walking around the city but mostly, really eating. And let me tell you, Poland has some good food. Like incredible hearty food, that makes you gain lots of lbs before you even leave the restaurant. From the second we touched down to the second we left, food was not a problem.

For our anniversary, we wanted something a little special, so we got room-service breakfast and it was DELICIOUS. Hot chocolate and coffee, croissants, omelettes, chocolate spreads, jams, yogurt and all of that without having to leave the bed? Where can I sign up to get that service at home too?

After we gorged on endless breakfast food, we got ready for a couple’s massage. I never had a massage in my life before, so just the thought of having someone massaging me seemed like a dream come true, and it really was. I don’t think I felt that mellow since I was… well, never, I think… Having someone kneading away all the tensions in my body, I can see now, why people go to get massages on a weekly basis. The feeling lasted for about 48 hours, before I had a rude awakening of deadlines tumbling into my mail account, but that’s a different story.

We spent the rest of our anniversary day walking around the city, which, let me tell you, is a wonderful place to just stroll around. The sidewalks are huge, traffic in the old city was minimal and everywhere you looked, you are surrounded by history – naturally. But there is just something about wide streets and lots of people walking on them, that just makes me happy. Everyone going some place, being some place, wanting to move on, bustling and hustling and us slowly moving towards pastries, ice cream, bubble tea and chocolate places, if that doesn’t make you happy, I don’t know what will.

The weather in Warsaw was unpredictable. From heavy snow and rain one day, it went to summery temperatures the next. But I guess, that’s what life is supposed to be about: be prepared for anything life might throw at you and sometimes, it’s okay to spend entire days in coffee shops. letting the world pass without you even noticing. So, on our 8 year anniversary, we did exactly, what everyone should do on their anniversary: reflect on yourselves. Take a timeout for your body and soul and reconnect with yourself and with the person you want to spend your life with. Have fun and eat your weight in good food, and let someone else knead away your troubles, don’t worry about deadlines, work or anything else that might be weighing you down in your everyday life. So thank you, Warsaw for a much needed break! Xoxo A&J

One thought on “Poland: Where the empty stomach meets the happy soul.”