I have been happily married for a little under four years now and I can honestly say that marriage is everything I never thought it would be: the good and the bad. First things first: Marriage is not for everyone and I acknowledge that. Some people simply don’t wish to be married although committed and some don’t wish to be in a commitment, others want to get married but haven’t found someone they can see a future with. Others yet seem to find someone anywhere and everywhere. I say, wherever you are, enjoy and embrace it!

When people learn that I am married, they often are surprised. Many think, that I probably married my high-school sweetheart, which I didn’t. They are probably also surprised, because I look (and 99.9% of the time act) young but getting married was a decision I made with my heart and with my mind. It wasn’t an impromptu decision, nothing triggered by the pink glasses of puppy love. Getting married was a conscious decision that both A and I made, together and individually for ourselves. We wanted to commit ourselves to each other in front of our friends and families, to remind ourselves that we don’t just exist in a bubble, but that other people too play a big role in the way we live our lives.

So, to us, and many people that I’ve known for a long time and that have been married for some time, marriage is more than just a piece of paper. I have many pieces of paper in my home, it’s the single thing I own most of: paper. I have documents, scratch paper, love letters, post cards, parchment paper, you name it, but getting married is not one of these papers. Yes, maybe, the bureaucratic side of things is about getting our signatures on a piece of paper (or the symbolic piece of paper, since most of the papers that we had to sign were actually online), but everything beyond that is way bigger than could be fit into all the books in all the libraries of all the worlds (if there are more than just this world out there).

I am telling you this, because I have heard it too often, that marriage is just that, a piece of paper and I cannot help but think, that whoever said that in the first place, clearly never has been married. Marriage isn’t just the ring on your finger, a name that you change, arm-candy. Of course, in Hollywood movies it’s a combination of all of these things, but in real life?

Well, in real life: Marriage isn’t for everyone, but it’s also not just something that people do light-heartily. It doesn’t always work out, even the best marriages will hit more than one speed bump along the way (more like a screeeeching halt). But to me, marriage is being in a deeply committed relationship with someone, who shares your values and your ideas about what you would like the future to look like. Somebody that will lift you up and encourage you, but also pop your balloon if you’re too close to the sun. Marriage is seeing the same face every single day and not getting sick of it, no matter how obnoxiously loud, unbearably miserable and unbelievably annoying your significant other is. And believe me, no matter how little you think you could ever annoy someone you love so much, I GUARANTEE you, you will eventually annoy them to the point, where all they want to do is bang their head against a concrete wall repeatedly.

I don’t like all aspects of marriage, I don’t think anyone does, it’s hard work, like REALLY HARD WORK and sometimes you wonder if it’s even worth it. Why bother staying married, why bother being in a relationship, why bother with anything, right? But see, at the end of the day (and when you’re married some days are just ENDLESS), I chose to be married to A because he makes me want to be better for him but more importantly for myself. A makes me want to go out every single day and give it my all, no matter how exhausted, no matter how pointless it may seem on some days, I still get out there. And A is still there cheering me on, wiping my tears (and yes, there will be lots of tears) and giving me a box of chocolate, because we all sometimes just need that. That, to me, is what marriage is about, wanting to be better for each other, being there for each other and wanting to be committed to each other.

Of course, it’s never that easy, right? I mean, sometimes you really want something to work out, and no matter what you try, you just can’t seem to get it right. I understand, I’ve been there (numerous times, romantically and in my career). And it’s okay to let it go, it’s okay to give up. But it’s also more than okay to hold on to it, as if it’s the last thing that you will ever do. Because truth to be told, if I didn’t hold on to A through all the hard times, I don’t think I would be half the person I am today. I also know, that neither A nor I would be anywhere close to where we are today, if it weren’t for each other.

So, what does it mean to be married: hard work, tears and sleepless nights, losing your mind for about 75% of the time. But most importantly: Loving your partner through anything and with everything you have. A likes to say, that he knew he was going to marry me from the moment he met me. I like to say, that I knew that I was going to love A until the end of my days, from our third date. It was a date that I planned from start to finish and it went (no surprise here) horribly wrong in many ways, but it’s when I realized that in our relationship we were equals, through and through. 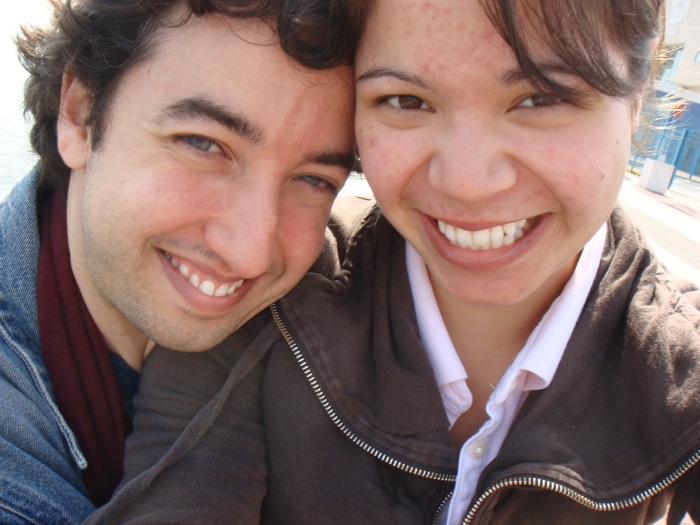 A and me on our third date in Philadelphia