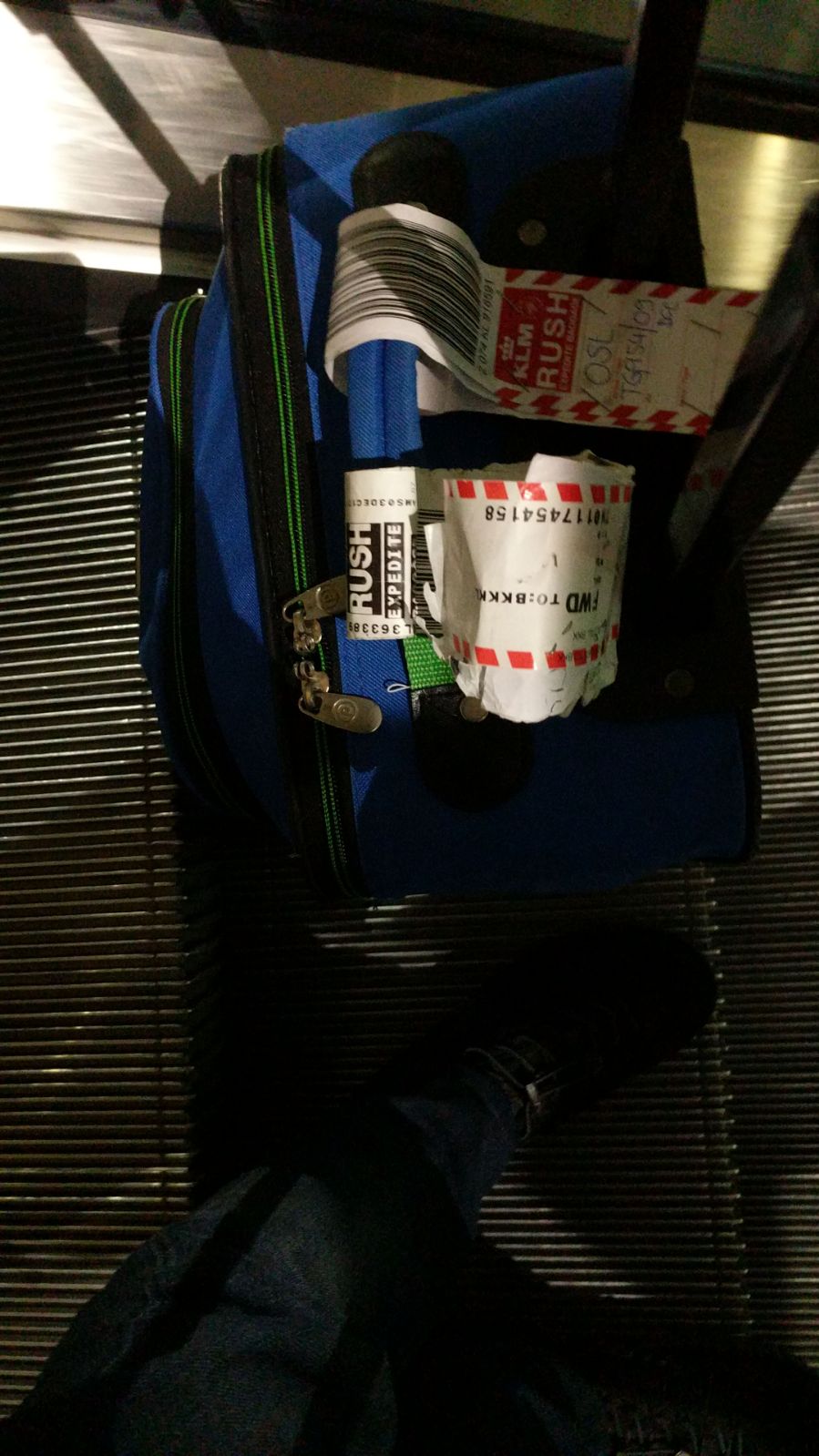 About a year ago A and I went to the US and hopelessly overshopped. Living in Norway teaches you to keep your shopping to the periods of times when you’re out of the country. Things are hopelessly overpriced compared to what you could get for the same kind of money abroad (and that’s taking the travel costs into consideration). So, that time we stopped at a department store and bought a couple of carry-ons. Usually, I just travel with a tech-backpack, i.e. a backpack where I carry my laptop, my iPad, my phone and all the respective charging cables and last but not least of course my headphones and of course all travel-related items, i.e. my passport, a toothbrush and one set of clothes for changing, just in case. Anyways, so I went ahead and bought the cheapest dingy looking carry-on one could produce while A went ahead and bought the more expensive fancier version, all business-like.

Fast forward some five odd years to today. Last week, a couple days before A’s birthday, he decided to go on a trip to Macau, China to a UN-meeting (I know, right? Not often you can casually slip that into a conversation). He was supposed to fly from Oslo to Amsterdam to Xiamen to Macau. Easy peasy, 15 hour travel time including a few hours of a layover in Xiamen. The night before A was supposed to fly, he was just packing the most important things to impress a room full of UN people,  he got a text message informing him that his first flight to Amsterdam got cancelled but within a few hours, he would receive rebooking information. The next day, A woke up to a rebooked flight from Oslo to Copenhagen to Amsterdam. A got to the airport and went ahead checking his luggage i.e. my blue carry-on, which I allowed him to use, because he was only supposed to be gone for one short week and he had ever since buying his black carry-on learnt that mine was just more awesome. It’s after all a very basic carry-on, less than no frills. You may already know, where I am going with this…

So, once in Amsterdam, A was informed that he was going to miss his Xiamen flight and was asked to head to the ticket office to get issued a different ticket, which he did. He waited in line for about 3 hours, because he wasn’t the only one who had to get rebooked. Patiently, he waited… and waited… and waited, until it was his turn. Eventually, when he got to the counter, the lady behind the counter told him, that she could rebook him to Bangkok and from there to Dalian, China and from there to Macau. This trip would include two in-between stops, which were more or less technical stops where all passengers had to get off the flight, go through customs and get back on. And of course, there were several 10+ hour layovers included. So all together, a 15 hour trip had turned into a 50 hour trip, meaning A would instead of arriving early a day before his birthday, arrive midday into his birthday. But A is patient, and he knew that there was little he could do. He was also informed, that if he wanted to make the Bangkok flight he had to hurry, as the flight was about to leave in 30 minutes. When he asked about his luggage, the agent told him to ask the agent at the gate whether or not his luggage arrived.

A did as told, already suspicious about the luggage information, but he asked about his luggage anyways. The agent at the gate asked him to ask at the luggage counter in Bangkok about his luggage. Somewhat satisfied with the response A was headed to Bangkok, where he immediately went to the belt to wait for his luggage, which – of course – never turned up. So he then went to the lost luggage people who filled out a report for him and told him, to ask again, when he finally arrives at his final destination. At this point A had already been out and about close to 24 hours, but he didn’t complain. He bought some touristy clothes, because A doesn’t put a change of clothes into his carry-on… At this point he also got rebooked – again – the agent had changed his flight to Shanghai and then gave him a direct flight to Macau. About the luggage, he got the same response: ask in Shanghai.

Which he did, same response: ask in Macau. In Macau, they – again – filled out a report, without giving him any further information, no handling number or anything of this sort. He was told, his luggage was most likely going to get delivered the following day. A, more patient than I have ever experienced him, went to his hotel, not without first buying the basic necessities…

Every day, A would call the airport which told him to call the airline, which told him, he had called the wrong airline, so he called the next one… This went on for three days. Eventually, he was so upset, that nothing else could console him anymore. Up to this point, A had ensured me that he was doing fine and didn’t need any help. But when I talked to him on that day, I could hear his desperation. See, it’s not just the things, you can replace things, but when you’re prone to anxiety, having a difficult time with time differences, something as little as delayed luggage can and will tip you off.

So, I did the only luggical (see what I did there?) thing, and decided to take matters into my own hands. I called and called and called several different airlines and got redirected and was told each and every single time, that “I LOST MY LUGGAGE”, as if I (or A) was the one not putting my luggage on the right plane. And that at this point, there is nothing they could do and that I should call the other airline. There were several times, where I got people who though they were helpful by citing regulation back to me… In situations like this, citing regulation is not helpful. Ever.

After three hours of relentlessly calling a sh*t load of airlines (all over the world – I got hung up so often, because the people didn’t speak English (or any other language that I was familiar with)), I finally thought I’ve gotten the answer I was looking for: A’s carry-on was put on the next flight to Macau and would arrive early next day. Yay. I thought and shared the good news with A. He too, was excited, so at least on his last full day in Macau, he could wear the clothes he actually had planned on wearing. He went to bed easy that night.

WELL, turns out, the carry-on never made it onto the plane. So later that day, I – again – called another sh*t load of people, by then they already knew me and my husband’s story very well. After being told that there was nothing I could do, than wait, I requested for A’s luggage to be sent back to Norway, since he was leaving the next day and no matter when the luggage arrived in Macau in the near future, he wouldn’t be able to pick it up.

I was assured, that this was going to happen, I was just to call the next day to confirm the travel dates for the luggage (!). That’s a thing, apparently. So, while A was in the air, heading back to Oslo, without having ever received his luggage (day 7 mind you!), I did just that. I was told, again, that the airline, he flew with was not responsible for the lost luggage and that I should – again – call the other airline and there was nothing they could do and that for now, no luggage was going anywhere.

At this point, I lost it. I really did. Mind you, it’s not even my luggage that went missing, but I felt horrible for A. There he was, already desperate, jetlagged, feeling insecure and the only thing at this point that makes you feel good, is wearing the clothes, you had planned on wearing. I know, there are bigger problems in the world, but when you have a history with mental issues, sometimes a horrible situation like this is everything you need to feel worse about anything. So, in a last ditch effort I called Macau and pleaded with the person, who was very nice and gentle, to help me. Which, he did. He must have put me on speed-dial, he called me about 5 times within a three hour span and just double checked that all the information was filled out correctly. After that, I decided not to call back any airline anymore – I just couldn’t take more rejection and I decided to wait for A to come home and deal with the rest then.

A day later, early in the morning, I was giddy waiting for A when I received a mysterious phone call. Oslo airport had called me, with a missing luggage that they would like us to pick up. I couldn’t believe my ears and didn’t ask any questions. At this point I already declared defeat and figured, that the airlines were forever going to keep my little blue carry-on. But there it was, at Oslo airport. A had just arrived from Amsterdam in Oslo (thankfully, this time no changed or cancelled flights) and picked up the luggage he so desperately needed in Macau and took it back home with him.

This goes to show you, you don’t always need everything you thought you needed. Sometimes, you may do and say all the right things and you may still not get what you expect. Sometimes, you are being incredibly patient and want to deal with a situation yourself, but no matter how hard you try to keep it cool, it’s okay to ask for help. It’s okay, if you feel stuck, to let someone else take over, that’s what being human is about. But most importantly, we all travel with baggage, we all have our worries, problems and things we like to hide, but every now and then you meet someone who accepts you with all the over-packed, dingy looking suitcases and still has a smile on their face, you need to hold on to that person. Because that person has truly accepted you and loves you to all the oceans depths and back. Forever.

But, also, for all you travelers out there: ALWAYS have a set of spare clothes in your carry-on. ALWAYS!