A and I have been enjoying Singapore as much as possible. Of course, like most travelers, we prefer sunshine over rain, but that’s not holding us back (that’s why they invented umbrellas and roofed areas). Yesterday we headed for the southern most point of continental Asia: Sentosa. Sentosa can only be described as an island full of hotels, roller coasters and weird tourist attractions (which I’m told are fun when the sun shines). Cheekily, if you asked me, they installed a hanging bridge, to ensure the southern most point, A was not convinced:

I, on the other hand, absolutely loved it, you know, as much as one can love man made beaches, over priced drinks and anything somewhat natural but not really (especially when you’ve just lived the real thing…).

On our way back to Singapore (because technically Sentosa is not part of Singapore?!), we decided to stop by Sentosa’s merlion. It’s a mythical creature supposed to bring prosperity and peace. As the name suggests, it’s a mix between a lion and mermaid… Apparently Alexander the Great’s son (or was it grandson?) was met by what he thought to be a lion when they first conquered the island, but the lion and (grand)son had mutual respect for each other so the lion backed off… Thus the lion became the mascot of the island and eventually it turned into a merlion, naturally. It should be mentioned that no signs have been found that lions actually inhabitated any part of Singapore. We haven’t seen the real thing, just yet (but we will today, yaaay!), but in the meantime we took a chance to tour the inside of the made up merlion on Sentosa, i.e. we took an elevator up, got a picture taken in the mouth of the merlion and took an elevator back down (due to bad weather we were not allowed on the top of the head…). So, we did the only thing one does, when in the Merlion’s mouth: pretending to be a lion. 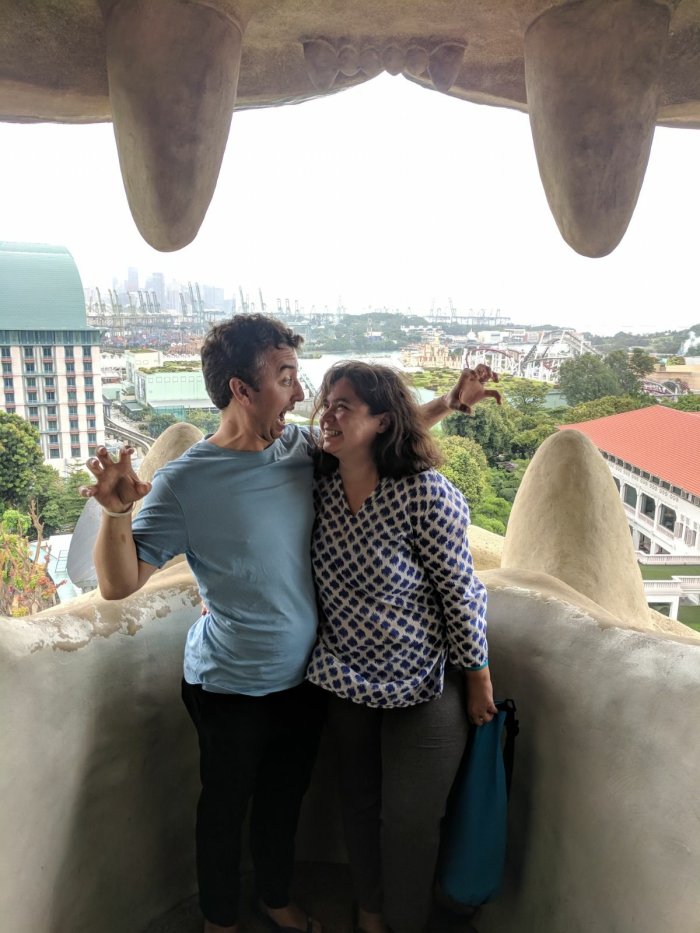 A is a Merlion

And that, my friends, is the Merliony way of living life when not everything goes the way you want or have planned. Have fun with it, be silly and just love everything to the fullest, especially the people you’re with…