I honestly have no idea how the year passed by so quickly but my hunch is that  constantly being on the move had something to do with it. Going places makes you feel like the world turns twice as fast while you are stuck in an airport/in an airplane/on the train, what ever your preferred way of traveling might be. But time might also stand still the second you enter a hotel room. It might seem like you just stepped out of a time machine: a specific paint of pink, floral print and matching carpets and instantly you feel like you’re 75 years older than you actually are and might as well be part of the interior… that’s the charm of traveling in Southern Europe.

A few days ago A and I traveled to Barcelona, my first time in Spain and in contrast to the vibrant and lovely city, we found ourselves transformed into a time that felt long before our time. But you know, somehow an overly gross pink room was just what we needed. Our Barcelona trip was A’s opportunity to make up for the last eat-cation I ruined when we went to Vilnius a few years ago but then again, any eat-cation that we have taken ever since that dreadful trip, has been an eat-cation just as much as every trip we have taken ever since we got married has been our honeymoon, so yes, we totally have been on about 34 honeymoons and 23 eat-cations in the past three years. But anyways…

A and I at the La Sagrada Familia

Within 30 minutes of arriving in our hot pink mess A dragged me across the city and took me to 3 different restaurants, requesting me to eat anything under the sun and drinking anything that one could possibly ferment. This sounds more awful than it actually is. Tapas, after all, are just small plates of food so they don’t really count, right? That’s at least what I am telling myself and no, please don’t destroy my illusion. I am fully aware what 45 tapas within 2 hours can do to your overall physique.

We spent the first two days eating and drinking mixed with short walks and strolling through Spanish Christmas markets. But mostly we ate. A made me try lots of things that one – in my personal opinion – should never eat, but then again how could you know you like something without ever really trying it? 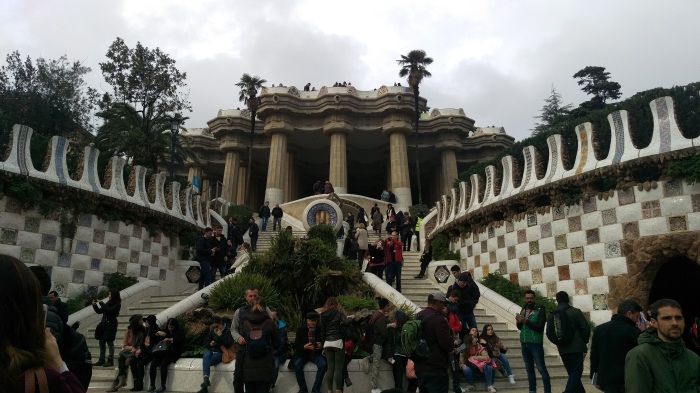 In between eating we also stopped at the Park Güell

As one can imagine, after 48 hours of this food-madness A and I were ready to experience something different. So we took the train to Sabadel to the dinosaur museum. The city was simply adorable and very far removed from the big-city vibe of Barcelona. We mingled with the locals, soaked up the sun while casually sitting outside small cafes, sipping on cappuccinos and cavas.

But no trip is complete without the obligatory dinosaur-“hunt”. So we found ourselves in the dinosaur museum that was clearly designed for youngsters below the age of 8 but nonetheless had A beaming in excitement. He ran around in the museum, babbling on about specific dinosaurs, their purpose in life and all the details that only fascinate a dinosaur-buff. A pointed out all the little things that only let a dinosaur-lover’s heart beat faster. I tell you what, seeing someone being so excited about something as simple as an old fossil is anything anyone could ever hope for in life. Moments like these make me fall in love with A all over again. 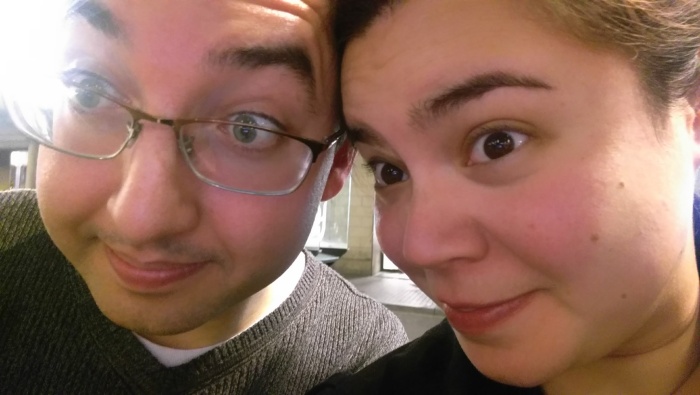 Judging by this picture you’d never know where we were, but I promise we were looking at dinos

If you are able and willing to show your fascination and love for the little things in life, hold on to that ability. It’s what gets you through the rough times. Like when later that day fell horribly ill and there was absolutely nothing I could do for the last 24 hours of our time remaining in Barcelona but to make sure that A was hydrated and had enough in his stomach to take what ever medicine would help him recover quickly. A was barely able to sit up, let alone walk and somehow I had to get him onto the plane and home. I don’t know how I ever convinced him to take a shower (otherwise I don’t think I could have sat next to him on the plane), and get dressed and keep moving ever so slowly towards the bus that would take us to the airport. Somehow we got checked in and got into our seats, all the while A was sleeping whenever we would sit down for more than five minutes. All in all, I think Barcelona was a success, although I guess there were just one too many small plates…