About four years ago I moved back to Austria by myself while A waved, forcing a smile, from the airport gate. I broke into tears, the second we stepped into the airport and I cried my eyes out for hours. I was the last one to board the airplane, not thinking once, twice but three times about turning around and leaving the airport, to be with A. I picked up the airport-phone about 17 times, dialing, and hanging up, redialing A’s number, to let him know, that I changed my mind, that I wanted to stay, that I wanted to be with him, that I didn’t want to go back to Austria… But I didn’t. I mean, yes, I did call and talked to A, but in the end, I boarded the airplane with a heavy heart. I landed in Austria a bit over 14 hours (including a 4 hour layover in Frankfurt) later with an even heavier heart. I was greeted by my family and friends, I remember my grandma waving at me, tears of joys streaming down her face. The image is so vivid in my mind. I remember it, like it was yesterday, when I told my grandma, that I found the one. The one and only. She hugged me tightly and laughed. I will never forget that moment. Because it was then, that I knew without a doubt, that this was going to last. A and me, that is. It simply had to.

Today, two years ago A and I moved to Oslo together. I could have not wished for anything better, because the way it is now, it is simply perfect. Of course, getting adjusted to Norway was very difficult, especially considering that neither of us spoke the language, when we first moved here. We had no idea, how and when we would find an apartment, we had no idea, where to get groceries, not even the slightest clue about anything, not even a little. I am not quite sure, why both, A and I jumped into this adventure like headless chickens, but I guess when you are so desperate to be together, everything else seems like minor details, that you tend to overlook. Which, clearly, we did, but we figured it out somehow, as we went along. The last two years have been a joyous blur and every single second that we spend together, makes up for all the heartache I felt, when we first had to say goodbye. 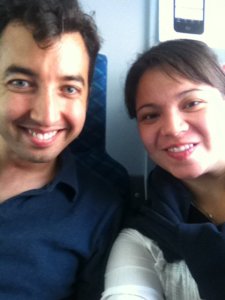 When I first stepped out of the airplane in Vienna, it felt like I gave up on the one thing, that meant the most to me, finding my megalodon, my mysterious creature out of the dark, that no-one ever has seen, but the thing that I so desperately wanted to believe in, because it was the only thing, that kept me going. It felt like I gave up on the idea of being with A. When in fact, I did the exact opposite, I am not going to say, that leaving the US to go back to Austria, was the best decision I ever made, because it was simply not. It was hard, it was exhausting, it was no fun at all, having to be away from the person, that I longed for so badly, but in the end, we got right there, where we wanted to be. As for A he has finally found the one person, that would imitate a velociraptor (what ever that sounds like) just to make him laugh. Someone that shares his passion about Jurassic Park, not only tolerating his ideas but actively participating in the recreation of dinosaurs in the modern world (well at least in his mind). Having to let that go, without knowing, when we would see each other again, was hard, but we both just had to believe in it, hoping for the best and I think, in A’s mind, there was just no other option, than us making this work. And he was right, there is no other option.

When you find something, that makes you want to be the best person that you can possibly be, someone that pushes you and encourages you and someone that is there for you, through all the dark hours, that’s when you know you have a good thing going and you should not let that go easily. Having to discard the idea of being with my megalodon, was hard, because I didn’t know, when I would get the chance to be with him again, but with a stubborn mind and two years later, I was finally able to be with him, 24/7. And I could have not asked for a better scenario, but it is, like Paulo Coehlo said in his famous book, the alchemist. “When you really want something to happen, the whole universe conspires to help you achieve it”. For love to blossom, we need to be passionate and compassionate about it. We need to give it space and air and sunlight, so it can get through the dark and cold winters (that holds especially true for living in Norway…). You need to look at your data, all the findings you have made so far and draw conclusions from what you have, meaning, when all evidence points you towards one direction, and when people say, you are crazy for believing in it, and tell you not to put too much effort into it, you should do the exact opposite. I say throw everything over board and get ready for the dive of your life. That is, how bones and teeth and jaws of megalodons where found in the first place. That is how they found amphibians of velociraptors. That is how you don’t know what you get yourself into, but you will be glad, that you have done it anyways.

In case you were wondering why a velociraptor and why a megalodon, A and I are both equally passionate about both, well one more than the other, but I guess this passion about things, that will only live on in our imaginations, allows us not only to draw our own pictures about how it could have been millions of years ago but it also allows us to imagine our future together. So I guess, we were a velociraptor and a megalodon in the past, a bird and a fish now and an electronic bird-type thing and a equally electronic fish-type thingi in the future, something along these lines…