New York City is the Big Apple that never sleeps where everyone has sex with everyone (thank you SITC). Washington D.C. is where they make big decisions and obviously the best city to base half of the American action movies on. Las Vegas is the city of sins where when you visit you instantly have a blackout and wake up married the next day. Switzerland is neutral and rich and swims in Chocolate, much like Augustus Gloop. Germany known for the Oktoberfest where everyone drinks beer and wears Lederhosen (although that’s probably more reality than a stereotype). Greek people know how to throw the best parties, which is why they throw your China on the ground after any party. Italians drink espresso while riding a Vespa. I am sure you can come up with at least 20 other stereotypical sayings of different cities and countries that you have heard of.

So, when I came to Hong Kong not only was I met with a lot of stereotypes (being Austrian with a Greek last name, speaking American English and living in Norway, make your best guess, I can assure you, I heard them all) but here I was meeting and trying to overcome the stereotypes that had formed in my head. But it is true, traveling allows you to open your mind, so here I will debunker some of the stereotypes that struck me as most fascinating (also spoiler alert!).

The only connotation I have when I see face masks are doctors. My most favorite one, most likely this one:

But wearing face masks in Europe is rather… unusual. So whenever I saw an Asian looking person wearing them, I was wondering why. Is it the air? Are there germs that they are afraid of breathing in? Are there odd chemicals in the air? What is it? WHAT?

Here is WHY they do it: They are not trying to protect themselves from whatever is floating in our air, BUT they are trying to protect US from their germs. Because most people wearing a face mask usually have a flu or a cough and think of themselves as contagious which is why they are wearing face masks (yes, I know, I just blew your mind).

Especially Hong Kong people keep saying how busy they are. How many commitments they have and how they have to jet from one thing to the other. So I learnt, that they go to bed really late, have to get up early to get to school (or work) and then pretty much fall asleep anywhere. Literally, anywhere:

Although, this picture is taken out of context, but you get the point.

I guess if you are that tired, you should really just take a nap, I am sure you will feel better afterwards, as for me, I’m good. I don’t usually feel the urge to take a nap anywhere, but if I did, I know that in Hong Kong, nobody would look at me oddly, because that’s a thing.

I am not making a remark on the umbrella revolution. But I will tell you this, I am not surprised that the umbrella became the trademark.

What is the one thing most Hong Kong people carry around with them, easy: UMBRELLAS. Rain or sunshine, they have one and they will use it and I guess it makes sense, heck I used it myself before I lost mine. Whenever I go hiking I open my umbrella, to get some much needed sun-relief, but also, I don’t use mine in rush hour on a busy street, that’s just called being inconsiderate. I don’t care how hard the sun shines on you. 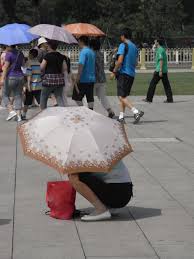 4. The Art of Selfies

I am guilty too of snapping the occasional selfie. Especially when there is something fun/exciting/crazy in the background. In my case though it’s the hazy skyline of Hong Kong, while climbing up Lion Rock.

Quite honestly though, I haven’t been able to fully understand the selfie phenomena. Especially young girls like to take a ton of selfies, any and everywhere. And I mean EVERYWHERE: at restaurants, at school, in the toilet, on the bus, in the mtr, anywhere on the street. And when you visit Hong Kong, I can guarantee you, you will bomb one or two hundred selfies too.

But Hong Kong wouldn’t be Hong Kong, if it weren’t for all the gadgets that they’d get to use, for instance: a selfie stick. Clearly the world’s best invention, in the history ever.

But be warned, by the time you figured out how to take a great pic with your selfie stick, and how to get a good angle, you will lose your patience and by then simply not care anymore. So just entrust a person with your camera and let them take a picture of you, chances are, they will not run away with your camera and you will get a great picture without an awkward angle.

I know this questions has been itching you forever: DO THEY EAT DOGS? I can guarantee you, Hong Kong is a dog-eating-free zone but if you ask locals, they will tell you a story about a small village in the middle of nowhere somewhere in China that eats dogs. But then again, they don’t eat your family’s dog Buck but specially bred dogs (just in case you were interested in knowing that).

I know, you feel relieved knowing that, but if you wanted to get into the local spirit, here is one for you: eating feet. Chicken feet, pig hoofs and anything else far beyond and in between.

I personally don’t like to eat the one or the other and quite honestly, I prefer Westernized Chinese food over real Chinese food (which oddly enough they just call food). But my advice: just embrace the food culture. My guess is that you will become an expert on dimsum and fried noodles and you are going to love it (or not, but then again, there is always a Pizza Hut close by, if you are more into that sort of thing). 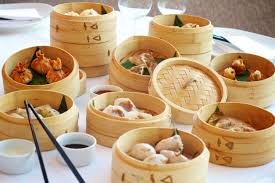 In conclusion I can say, having lived in Hong Kong for a little over two months now, that Hong Kong is like a fairy tale. Yes, the whole dragon slaying thing and evil stepmother scenario, but ultimately you wake up only by being kissed by your one true love’s kiss, my Prince Charming called Hong Kong.